Demand for gold continues to rise, and supply forecasts continue to fall.

It’s an interesting take on the current dynamic; what if there simply isn’t much more economically viable gold to be mined? If even an increase in exploration budgets and scope would be insufficient to increase supply?

Ian Telfer, chairman of Goldcorp Inc., is the latest industry magnate to predict the world has reached “peak gold,” saying that from here on out, mine production will continue to decline because all the major deposits have been discovered. 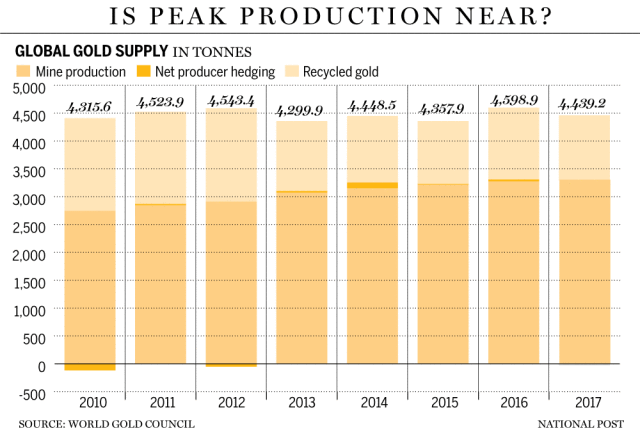 Although gold prices sank two per cent to US$1,289.86 per ounce this week, sliding below the psychologically significant US$1,300 mark for the first time this year, Telfer said that day that he remained “bullish” and predicted gold prices would surpass US$1,500 or US$1,600 per ounce before the end of the year.

Telfer raised several possible reasons for why there are fewer discoveries. “Are we not looking for it? Are we bad at finding it? Or have we found it all? My answer is we found it all. At US$1,300 (per ounce of) gold, we found it all. I don’t think there are any more mines out there, or nothing significant. And the exploration records indicate that.”

ORIGINAL SOURCE: 'We're right at peak gold': All major deposits have been discovered, declares Goldcorp chairman by Gabriel Friedman at Financial Post on 5/16/18