Here's Why Rising Interest Rates Will Crush the U.S. Economy

As the Global central bankers try to raise the debt-laden economic titanic through jacking up interest rates except for two notable central banks that is the Central Bank of Japan (BOJ)  and the European Central Bank (ECB) at this point. They could actually crash it faster than realized as now we know through various voice's that their only trying to raise the rates to just reduce them again.

Rising interest rates will soon have a devastating effect on our economy, mostly because of a single factor that hardly anyone is talking about.

The 10-year Treasury yield is about to cross 3 percent, a rate not seen since January 2014. Given our vigorous economy and stock market forecasters pricing in up to four rate increases this year, some credible economists are predicting the 10-year yield at 4 percent by year-end.

The single most dramatic effect of today's rising rates is the interest we will pay on our national debt. 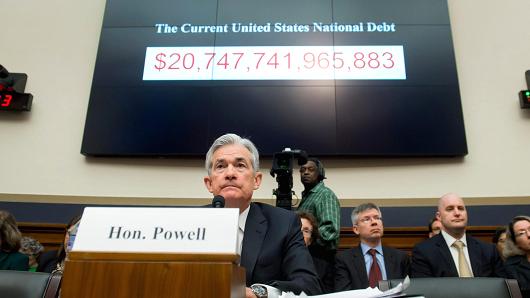 During the eight years of the Obama administration, two economic events occurred that befuddled most economists: Our total national debt rose to $20 trillion from $12.3 trillion while interest rates sank to a new all-time low.

The national debt figure includes money owed by the government to itself. The debt held by the public is what matters to us since the government must pay out the interest to those bondholders. In 2009, the year President Obama took office, the national debt held by the public was $7.27 trillion. At the end of fiscal 2016, that had soared to approximately $14 trillion.

Given that our marketable debt doubled from 2009 to 2016, it's remarkable that the annual cost of the interest on the debt rose far less, from $185 billion to $223 billion. Thank you, Federal Reserve.

Some observers suggest that the staggering interest cost on the national debt is the main reason interest rates were kept so low.

We now face a potential economic catastrophe as the long period of very low interest rates comes to an end. The recent stock market meltdown has been attributed to rising rates. That is correct, but for the wrong reasons.

ORIGINAL SOURCE: Rising interest rates will be devastating to the US economy for one big reason by Peter J. Tanous of cnbc.com on 3/6/18