Remember how it went in 2008? Markets positively drowning in credit. Subprime for miles, increased credit card limits for all. Boom times. Everything was humming along exactly as it had been for years.

Then, overnight, it all vanished. Bear Stearns, Lehman Brothers, AIG...the whole sordid mess. And credit evaporated. Banks went from over-loaning to anyone with a pulse to a dead stop. This time around, it may well happen in the same manner: Triggered by something almost nobody saw coming, and happening so fast there is no time to react. 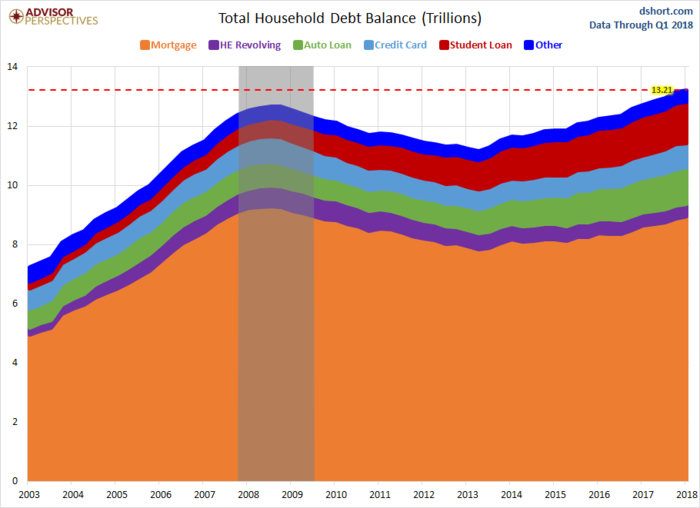 As a result of the housing and mortgage crisis of the Great Recession, economists have been paying more attention to the liabilities portion of household balance sheets. Among the New York Federal Reserve Board's many economic reports is the Household Debt and Credit report, which is released quarterly with data going back to 2003.

Data is collected through the NY Fed's Consumer Credit Panel which is constructed from a nationally representative random sample of Equifax credit report data resulting in a sample size of over 40 million individuals quarterly.

ORIGINAL SOURCE: Household Debt And Credit Report: Up $536B in Q1, Another Peak by Jill Mislinski at Advisor Perspectives on 5/17/18