How Can You Tell a CEO Is Lying? Their Shares Are Moving

By now, if you’re not assuming that corporate CEOs are lying to you every time they try to sell you on something, you’re not doing your due diligence. A Harvard study found that not only do CEOs lie an inordinate amount, they’re really good at it, and a large part of the reason they became CEOs in the first place was because they lied so often and so well.

It’s good policy to begin any critical analysis of CEO statements or behavior with the initial assumption that they are trying to profit from your falling victim to their deception.

For example, the basic conceit of a stock buyback is that a company honestly believes that its stock is so cheap, the best use for its free cash on hand is to buy its own stock. The announcement of a buyback is usually accompanied with high-flown CEO-speak about what a compelling buy the stock is.

Total buyback activity is expected to top $800B in 2018. These buybacks, in their near entirety, will be funded by the Trump tax cut. By a handout to Wall St. that corporate CEOs did nothing to earn and can use with impunity to drive their stock prices mindlessly higher with relentless open-market buying. And again, it cost them nothing.

Then, more often than not, while the CEO is publicly flogging the narrative that his company’s stock is a great value that should be bought, he and his fellow company insiders sell as much stock as they can, often using the company’s own buyback cash to do so.

Is it illegal? No. Is it immoral, deceitful, and generally reprehensible? Yes, but as discussed, this is the behavior you should expect from public-company CEOs. A 2016 study found that 21% of them were out-and-out psychopaths. 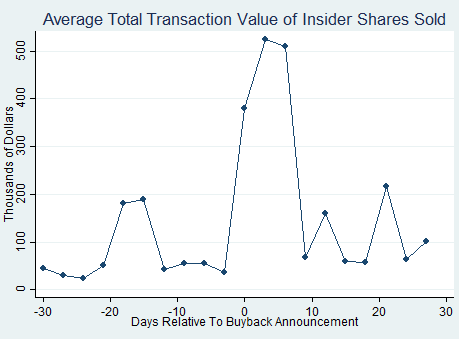 It’s a simple exercise to follow the money. Trump hands corporations an enormous tax cut, corporate executives use the proceeds to initiate a huge buyback (not caring in the slightest whether their stock is actually a good buy or not…why would they, it’s not their money). Then they sell their own shares, pocketing the corporate tax cut money directly.

The buyback serves as a meaningless, flimsy intermediary, a short-term stock-price-bubble supporter that allows CEOs to funnel corporate tax cut money straight into their own pockets. Never mind that we’re running a trillion-dollar deficit. The worst of Wall St. are getting richer at your expense, and they’re barely bothering to disguise it anymore.

A study by the SEC of 385 recent share-buyback announcements — this is when companies announce how much money they will spend in the future on buying back their own shares, but before they actually begin buying them — found share-buyback announcements led to “abnormal returns” in the share price over the next 30 days and executives used this share price surge to cash out.

“In fact, twice as many companies have insiders selling in the eight days after a buyback announcement as sell on an ordinary day. So right after the company tells the market that the stock is cheap, executives overwhelmingly decide to sell,” explained SEC Commissioner Robert Jackson Jr.