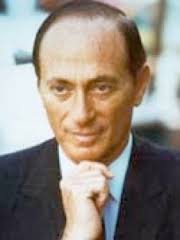 Today I’d like to tell you about a legend I recently had the pleasure of meeting.

His name is James Dines. But I — and most of his peers — have too much respect to call him James. So we always refer to him as Mr. Dines.

Perhaps you’ve heard of him before. Mr. Dines is what you call a ‘guru’s guru.’ He’s a guy who the biggest powerhouses in the financial publishing world look up to as a pioneer — and as a mentor.

He began publishing his financial newsletter — The Dines Letter — in 1960, and is credited as the first analyst on Wall Street to pound the table on gold, silver, and other precious metals.

That’s right — the very FIRST. ‘The Original Goldbug!” as published in Barron’s.

At a time when being a goldbug was considered treasonous, he called for the yellow metal to rise from $35 an ounce to over $400.

In fact, his gold predictions at the time were considered so outlandish that Wall Street fired him!

But Mr. Dines stuck to his guns. And he decided to take his message public. So he warned the world of the coming gold boom through his own newsletter.

It was the first newsletter to be published independently outside of a Wall Street brokerage firm or bank.

And it was Mr. Dines and his readers who ultimately got the last laugh.

Barron’s, on 14 Jan 1980, hailed Mr. Dines’ prediction as "one of the most fantastic investment calls on record."

Over the last 21 years, Mr. James Dines has correctly forecasted the Dow's major market turns 19 out of 21 times — That’s an unheard of success rate of over 90%.

He called the Internet boom, the China boom, and the uranium boom of the early 2000s.

And he warned his readers early about the housing collapse of 2007.

He’s made some of his readers fortunes in the process… some of whom are now millionaires thanks to his sharp recommendations.

He’s carved out a name for himself with his prophetic calls.

Now Mr. Dines’ latest (and final) warning could be his most shocking revelation yet. And it shouldn’t be taken lightly.

Americans have been unrelentingly assured by the Washington Economic Establishment that the economy is still recovering from the 2008 “Great Recession.”

But Mr. Dines has never accepted that there has been a recovery, even the government-described “fragile recovery.”

All that’s happened since — including the “rebound” in stock prices — has simply been the result of printing breathtakingly large amounts of money and debt.

Now America is saddled with nearly $20 TRILLION of debt. You could literally spend a million dollars a day, every single day, back to the day when Julius Caesar was born (12 July 100 BC) and still not even spend $1 trillion!

That figure doesn’t even take into account our “unfunded liabilities” like Medicare, Medicaid, Social Security, and student loans.

The debt is huge and growing (by nearly a trillion dollars a year). And there’s no possible way to pay it down. World trade is such that we could not possibly earn that much money exporting to other nations, particularly since they are more interested in exporting into our market.

Before long, payments on the debt will become the third largest item in the federal budget. Something is going to break...

Mr. Dines has long warned that cutting the dollar’s link to gold wouldn’t just lead to chaos… it would be the dollar’s death knell.

Currencies not backed by anything tangible, like gold or silver, have always left debt and destruction in their wakes.

There isn’t a paper currency on Earth worth trusting as much as gold and silver. And he’s been pounding the table on them for many years now.

Mr. Dines has described all paper currencies as “a bunch of staggering drunks holding each other up,” and believes that currency crises will keep happening with increasing frequency, each worse than the previous one, until gold is restored as the primary monetary asset.

In the coming weeks we will unveil several ways Mr. Dines is advising you prepare for these crises, including his predictions on the rising price of precious metals and related equities you can use to harness what he calls the coming “greatest transfer of wealth in recorded human history.”

Nick is the Founder and President of the Outsider Club, and the Investment Director of the thousands-strong stock advisory, Early Advantage. Co-author of two best-selling investment books, including Energy Investing for Dummies, his insights have been shared on news programs and in magazines and newspapers around the world. For more on Nick, take a look at his editor's page.