Nobody is even paying lip service to minding past crashes at this point. Combined with the most profligate and reckless federal fiscal policy on record, we are setting up for a crash risk-asset holders are entirely unprepared for.

We are in full “So long as everyone keeps making money, ignore everything else” mode. It is exactly, exactly the feel and phenomenon that marked the investment mood and milieu just prior to the subprime collapse.

Almost everyone knew it was insane and unsustainable. But everyone, from the zero-income would-be real estate flipper lying on his loan application to the Wall St. exec bundling subprime garbage and selling it unwitting foreign governments as exotic derivatives, didn’t care so long as the gravy train kept rolling.

All signs indicate that when the emergency brakes get thrown on this time, it will be far worse than 2008. 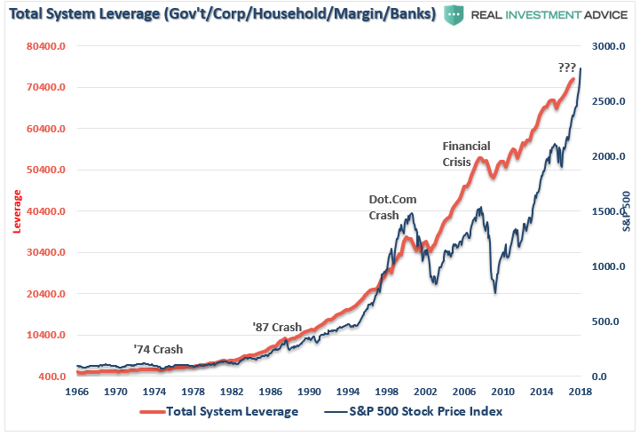 The US stock market has broken with historic valuations and risen to 155 per cent of GDP, up from 95 per cent even in 2011.

Margin debt on Wall Street - the bellwether of speculation - has rocketed to $US550 billion ($712 billion). The Fund warned of "late-stage credit cycle dynamics" all too like 2007, and behaviour "reminiscent of past episodes of investor excesses".

Leveraged loans in the US have doubled to $US1 trillion since the pre-Lehman peak. There is a risk that defaults could spin out of control, leading to a complete "shutdown of the market", with grave economic implications.

The shadiest "Cov-lite" loans made up 75 per cent of new loan issuance last year, with a deteriorating quality of covenant protection. This is a sure sign that debt markets are throwing caution to the wind. "Embedded leverage" through derivatives has become endemic. US and European bond funds have raised their derivative leverage ratio from 215 per cent to 268 per cent of assets since 2014, with gross exposure reaching "worrisome" levels. And so it goes on.

the awful truth is that the world is just as vulnerable to a financial crisis as it was in 2007. The scale is now larger.

The authorities have fewer safety buffers, and far less ammunition to fight a depression. This time China cannot come to the rescue. It is itself the epicentre of risk.

The detonator for the denouement is self-evidently Fed tightening and - should it ever happen - a surging dollar. Trump may have thought he was being clever in thinking that fiscal pump-priming this year and next would greatly help his re-election chances. He may instead have brought forward global forces that he does not begin to understand, and guaranteed a frightening crisis on his own watch.

ORIGINAL SOURCE: How Trump's hair-raising level of debt could bring us all crashing down by Ambrose Evans-Pritchard at Brisbane Times on 4/20/18