With a rag-tag Trumpian crew of ex-bankers and Goldman Sachs alumni as the only watchdogs in town, it’s time to focus, because one thing is clear: Donald Trump’s economic team is in the process of making the financial system combustible again. 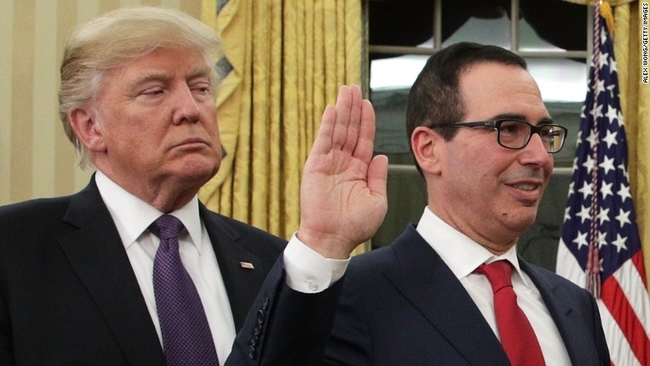 After the initial hue and cry that sometimes surrounds presidential appointments to varying positions, unless they’re at the top of the pyramid, the appointees themselves usually fade into relative obscurity fast. Which leaves them relatively unaccountable for the damage they wreak. Trump has assembled quite the cast of characters.

As a congressman from South Carolina, ultra-conservative Republican Mick Mulvaney, dubbed “Mick the Knife,” once even labeled himself a “right-wing nut job.” Chosen by President Trump in November 2016 to run the Office of Management and Budget, he was confirmed by Congress last February.

These are the sort of folks running the asylum, along with a cadre of ex-bankers who work under one fundamental philosophy: The banks should be able to do whatever they want, whenever they want. Free market everything, always. No regulation.

Because they know that this maximizes profits during the best of times and that the government will have no choice but to bail them out in the worst of times. Press your bets, max leverage. Because when it all blows up, your golden parachute will save you as the flaming wreckage descends on the average American taxpayer.

Collectively, the biggest US banks already have their get-out-out-of-jail-free cards and are now sitting on record profits after, not so long ago, triggering sweeping unemployment, wrecking countless lives, and elevating global instability. (Not a single major bank CEO was given jail time for such acts.)

In time, we’ll come to a reckoning with this era of Trumpian finance. Meanwhile, however, the agenda of these men (and they are all men) could lead to a financial crisis of the first order.

ORIGINAL SOURCE: Here Comes the Next Financial Crisis at The Nation on 2/1/18