Citing overall macroeconomic numbers and the “recovery” and “progress” they indicate is disingenuous on two levels.

One, when salaries for the top 1% increase 138% and 15% for everyone who isn’t in the top 10%, those economy-wide numbers are going to be immensely skewed by the huge hauls taken in by those at the extreme top of the pyramid.

And two, injecting non-asset-backed printed paper into an economy ad nauseum is going to prop up everything, for a while. Headline numbers will look tremendous if there are suddenly trillions of extra dollars to spend, created at no cost to anyone.

Of course, it’s not that easy. Of course, there is an equal and opposite negative effect to such brazen manipulation. Just not right now, and not quite yet. Politically and societally, it’s so much easier to pretend there never will be. So that’s what we do until math inevitably shatters our mass fantasy. 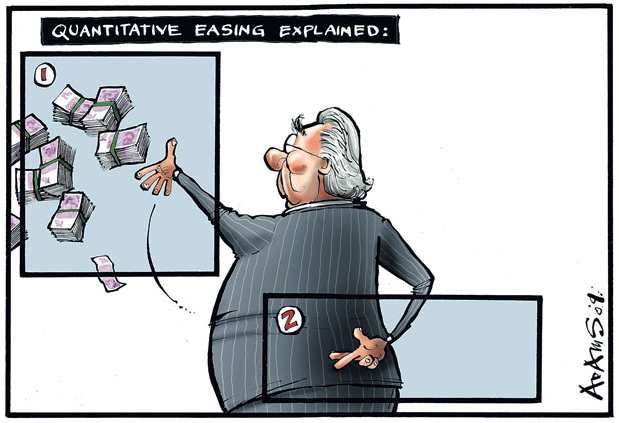 Total US household debt is exceeding $13 trillion, while household income hasn’t come close to keeping up. Quantitative easing is proving to be wolf in sheep’s clothing.

Quantitative easing is a slight-of-hand manipulation of currency. Easy credit is supposed to encourage economic growth. In reality, it devaluates the dollar as consumer goods become more expensive. We are looking at inflation in the not-too-distant future.

Unemployment is at a record low. That, too, however, can be deceiving. The highest increase in employment has been in low-level jobs, where wages haven’t been adjusted beyond the 2008 level and where there are few benefits.

It’s survival living, at best, for people who have enjoyed little of the benefits of an economic recovery. These are the same people hardest hit by the 2008 crisis. The government’s response to the crisis was to toss fiat money at the problem, thereby inflating the value of stocks and housing of the top wage earners.

The government bailout was supposed to help a country in crisis mode. Eleven companies who made bad business decisions received $10 billion in government aid as a reward for mismanagement. The explanation, or excuse, was that lack of government intervention would lead to greater financial turmoil.

When large companies know a paternal government will rescue them from poor choices, they lack incentive to make better management decisions. Instead of government intervention, it is natural market forces that reward competency and create greater wealth for all.

ORIGINAL SOURCE: Quantitative Easing and the Debt Bubble by Virginia Fidler at The Gold Telegraph on 4/16/18