Does anyone look back at government predictions that were made in 1982 to check their accuracy today? We can’t do that, because the US Energy Information Administration didn’t start making these forecasts until 1994. But from that date? They’ve overestimated Energy Intensity (Energy Consumption / Real $ GDP) 87% of the time. High energy intensity means high industrial output as a portion of GDP.

Couple that near-100% overbullish hype rate with current all-time lows in US fertility rates, and do you think we might be in for actual energy consumption levels that are mere fractions of what the EIA currently projects?

Since 2010, the discrepancy between expected growth in energy consumption versus actual observed consumption has been rapidly growing. The chart below shows total global energy consumption from all sources (petroleum, natural gas, coal, nuclear, and renewables) from 1985 through 2030 in quadrillions of BTU's. 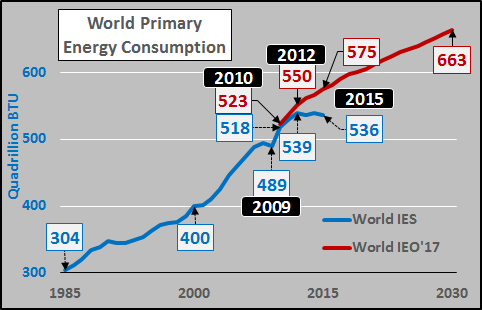 All the interest rate cuts, debt incurred, emergency programs, and tax cuts since '08 will never be able to fix what ails us. What should be clear is the '09 financial crisis was only a reaction to a far larger deceleration in population growth...and the policies undertaken since have only sent fertility rates spiraling further. 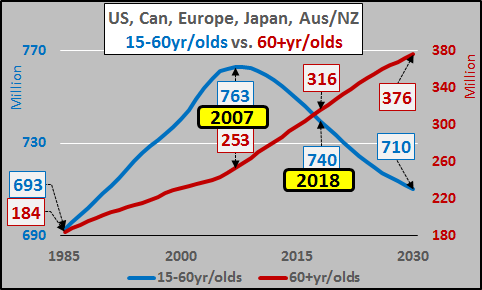 A system twisted and made entirely reliant upon infinite growth in a very finite world was always like a bug on a freeway...it was just a matter of time.

ORIGINAL SOURCE: If You Don't Know Where You Are or Which Way You're Headed...Tough to Forecast Accurately by Chris Hamilton at Economica on 5/29/18