It’s easy to find jaw-dropping facts and figures related to student loan issuance. Almost all of them are, at this point.

But especially jarring is this: From 2010 to 2015 higher education enrollment actually fell, but student loan totals continued to scream higher without a single quarterly pause. It is the state of the QE union: Overflowing with free Fed ZIRP money, banks have packaged and sold debt with nearly no regard to demand or ability to repay.

Skyrocketing college costs and six-figure-indebted liberal arts majors with no clear career path or ability to earn much more than entry-level wages have been the result. 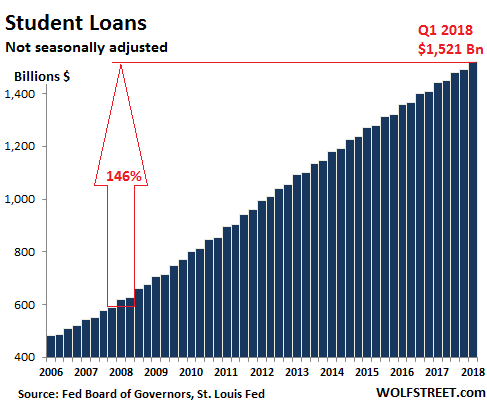 But it’s not like more people are going to college. Higher-education enrollment had peaked in 2010 and declined at least through 2015, according to the last data available from the National Center for Education Statistics. And yet, over the 10 years from Q1 2008 to Q1 2018, student loan balances soared by 146%, from $619 billion to $1.521 trillion. Over the same period, the consumer price index rose 16.9%.

Students added $902 billion to their debts over the past 10 years — a debt that will dog them for decades to come. And for most of this debt, taxpayers are on the hook. But who obtained the money?

A whole economy has sprung up around this bonanza, with entire industries getting fat: Investors in private colleges; the student housing industry, which has become an asset class within commercial real estate; companies like Apple that supply students with whatever it takes; the textbook industry; overpaid top administrators; construction companies and affiliated industries building university-owned projects, from mega-stadiums to glitzy administrative buildings; Wall Street by making it all possible; and many more. But hey, that’s how you get GDP and corporate profits to grow. It’s a dirty job, but some’s got to do it.

ORIGINAL SOURCE: The State of the American Debt Slaves, Q1 2018 by Wolf Richter at Wolf Street on 5/8/18