The word “unprecedented” doesn’t adequately capture what the world—and the gold market—experienced in the first three months of 2020.

Covid-19 came almost out of nowhere, a black swan event that engulfed the world. The gold market, like everything else, was impacted in extraordinary ways.

It’s useful to look at what transpired last quarter in our industry, because there were some very clear lessons. These lessons will help us all better understand, and better prepare, for what might be ahead.

To state the obvious, the gold price was volatile last quarter. It rose roughly $150, nearly 10%, from its January low to February high, when coronavirus headlines hit North America. As the rout in equity markets picked up steam, however, gold succumbed to the pressure, falling nearly $200 from late February to early March, an 11.8% drop in three short weeks.

But by the end of the quarter, despite the volatility and selloffs, gold had done its job: the price ended higher than where it started.

Here’s how gold performed vs. other major asset classes in the first three months of 2020. 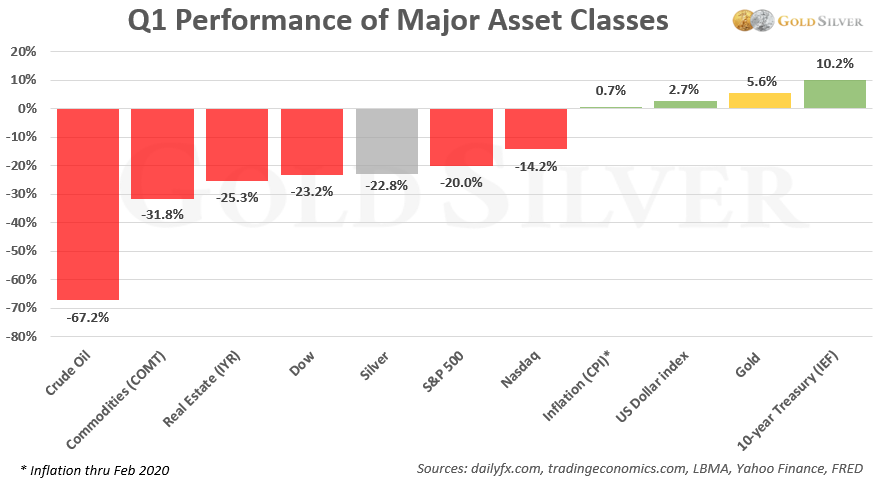 Amidst a sea of losses, gold was up 5.6% last quarter. This is especially noteworthy since gold has now risen six consecutive quarters.

In contrast, all major stock indexes were lower. In fact, the Dow booked its worst Q1 in 124 years.

Silver didn't fare so well, and in fact logged its worst quarter since 2013. As we’ve shown before, silver does not perform as well as gold in stock market crashes.

The 10-year Treasury outperformed gold, and while the US dollar rose, it lagged the gold price.

During those periods gold fell, some investors questioned why mankind’s oldest crisis hedge declined in the middle of a global pandemic.

In short, the rout in equity markets forced margin calls and immediate liquidity needs. Cash was desperately needed to meet unexpected and sudden margin requirements and offset losses elsewhere. To a large extent, gold was sold to meet those needs.

Keep in mind that many gold positions were sitting on a profit. Gold was up 18.8% last year, and up 10% in early 2020 trading, so profits were ripe for the taking.

A similar effect was seen in October 2008. The sudden crash in equity markets pressured investors and traders to sell gold to meet margin demands.

This fact highlights another advantage of gold, one sometimes overlooked:

As any precious metals investor knows, demand for gold and silver soared last quarter. The rush for metal was so high that it overwhelmed the industry.

Retail demand for physical product was, by any account, greater than what was seen during Y2K, 9/11, and the 2008 Financial Crisis. It was so overwhelming that many trading desks shut down—many products were simply not available, and what was available was backordered 3+ months.

Institutional demand also soared, particularly after Goldman Sachs released a report saying gold was at an “inflection point” and that it was “time to buy on the back of the new Fed stimulus measures.”

The Comex was tested like never before. In response the exchange recently moved 34 tonnes, about 13% of total holdings, from the “eligible” to the “registered” category to increase deliverable ounces.

The London Bullion Market Association (LBMA) was also tested. Banks requested that the CME allow gold bars in London to be used to settle its contracts. Contracts in NY also traded at a $60 premium to London, the highest spread since 1980.

In a relatively short period of time, the availability of physical metal was in short supply.

Not only did demand itself gobble up more supply than usual, the virus hindered the industry’s ability to supply metal. The entire supply chain was disrupted, something many insiders thought would never occur. Here’s a summary:

The disruption to the industry affected every part of the supply chain. It forced premiums to rocket higher, with all intermediaries charging higher margins to cover the increased volatility, credit risk, and cost to source metal. Due to the rise in premiums, lower prices did not, for the most part, give investors a better value.

The response to Covid-19 by governments was swift and dramatic.

Over 50 countries cut rates last quarter, including the Eurozone, UK, Japan, Canada, and Switzerland, among others. The US Fed cut rates twice—the first unscheduled action since 2008—bringing rates to near zero.

Further, global liquidity injections were on a scale never before seen. The US Fed said it will buy an “unlimited amount of government debt, as well as corporate and municipal bonds,” in what will result in the biggest expansion of its balance sheet in American history.

Globally, according to Bank of America, a total of $12 trillion in stimulus has been pledged; $7 trillion in monetary stimulus and $5 trillion in fiscal stimulus.

The magnitude and speed of the response was greater than at any time in history.

Recent policy decisions by the Fed and most central banks are likely to have long-lasting ramifications on the global economy. These decisions underscore the investment case for gold, as well as the likelihood of demand remaining high for the foreseeable future.

The US deficit was already high, and now will grow even further. The same is true in developed economies. Currency debasement exceeds what was seen in the Global Financial Crisis, the concern this time is that it could lead to actual inflation, not just the fear of it.

The ratio remains at extreme level, ending the quarter at 112.4.

Perhaps forebodingly, I said in last quarter’s report that “a black swan event or sudden crisis could lead to even bigger advances in the gold price.” Little did I know.

The advantages of holding physical gold have been made abundantly clear.

Is the Fed Delusional or a Big Pack of Liars?