A 5% yield on the 10-year seems downright extravagant given how long we've seen interest rates bumping along zero.

But it was the old normal; it was at that level just prior to the 2008 crisis. Such a rate, especially rising to such a level in a matter of months, would play absolute havoc with debt markets and cause a spectacular cascade of defaults.

During the Fed’s QE period,  2010-2015, foreign investors and the Fed took down the equivalent of 80 percent of the new debt issuance.

Since 2015, flows into the Treasury market have deteriorated markedly, and the timing could not be worse as new Treasury issuance is ballooning with skyrocketing budget deficits. 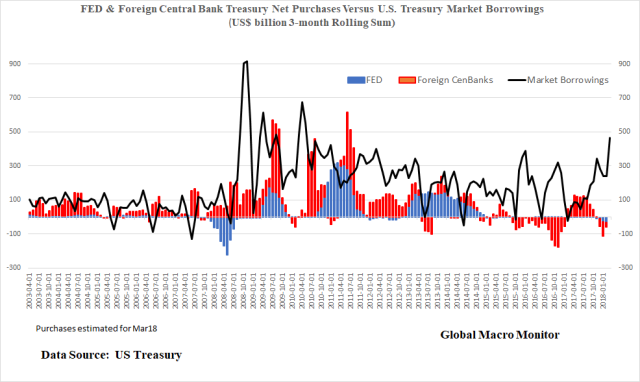 During the past twelve months, for example, net foreign and Fed flows collapsed to just 17.6 percent of new borrowings. Even worse, the net flows were negative (we estimated March international flows) during the first quarter during a record new issuance of Treasury securities of almost $500 billion.

Given the rapidly deteriorating technicals and fundamentals (rising inflation) we believe the 10-year yield should be and will be much higher sometime soon.

That is we are looking for a “super spike” in bond yields, and expect the 10-year to finish the year between 4-5 percent. The term premium, which has been repressed due to all of the above, should begin to normalize.