The subprime housing bubble was marked by a number of outright absurdities; anyone living in Las Vegas at the time can tell you about the cab driver boasting about having just “bought” (via zero down and a mortgage obtained with fictitious income information and a more-than-willing mortgage broker seeking his fee no matter what) his sixth investment property.

And though there isn’t a single bubble-inflator as flagrant as there was back then, the data is striking: 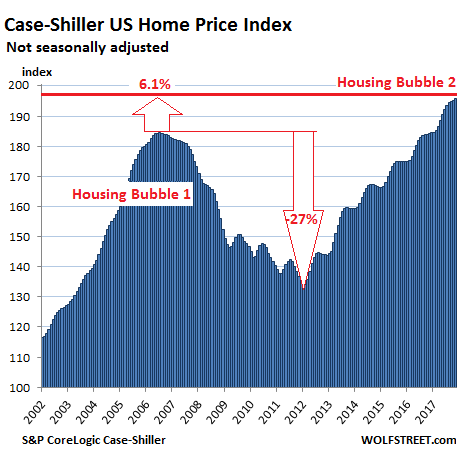 So with home prices surging for years and with mortgage rates now spiking, what gives?

Today the National Association of Realtors reported that sales of existing homes fell 4.8% year-over-year in January – the “largest annual decline since August 2014,” it said – even as the median price rose 5.8% year-over-year to $240,000.

Homeowners have a number of financial and tax reasons for not wanting to sell, including:

If the Fed raises rates four times this year, and if the yield curve steepens even a little to edge back toward a normal-ish range, as I expect it to, average interest rates for conforming mortgages may well be around 6% by year-end. And that, I think, would mark the real pain threshold for the housing market.

ORIGINAL SOURCE: What will Spiking Mortgage Rates, High Home Prices, & the New Tax Law Do to the Housing Market? by Wolf Richter at Wolf Street on 2/21/18