The Fed Has Lost It

Today’s announcement to lower interest rates by 25 basis points (0.25%) confirms the Federal Reserve is a political animal… ruled by populist whims and not sound monetary logic.

It should come as no surprise to GoldSilver.com readers. We pointed out Fed Chairman Jerome Powell caved long ago.

And that the US, one the last places in the world with positive interest rates, would move towards currency devaluation.

But let’s forget the short-term; the real story here is the Fed has handcuffed itself. The central bank’s ability to fight off the next recession or crisis is severely compromised.

Think about it… why should rates be pushed down when…

Does that sound like an economy that needs stimulus? One where companies are tightening their belts, borrowing less and hiring less?

No, it doesn’t. There is no clear reason to be lowering rates now, other than because President Trump wants it.

Which is ironic because if not for his Trade War with China, the Fed could be raising rates and strengthening the dollar instead.

Sure, lower rates could spur some temporary lending and growth, but that’s not enough reason to spit in the face of Economics 101 nor weaken your tools to battle the next slowdown or crisis.

As our president Alex Daley put it, “Even if their tool works, they are basically firing a bullet when there is no sign of an intruder.”

The Fed will definitely use the lower-interest-rate tool in the next recession. But as we’ve shown, that tool has already lost its punch. It won’t stop them from trying, but their ability to ride in on a white horse is diminishing. They’re selling the white horse now.

Look where the Fed has now positioned rates for the next crisis, compared to past levels. 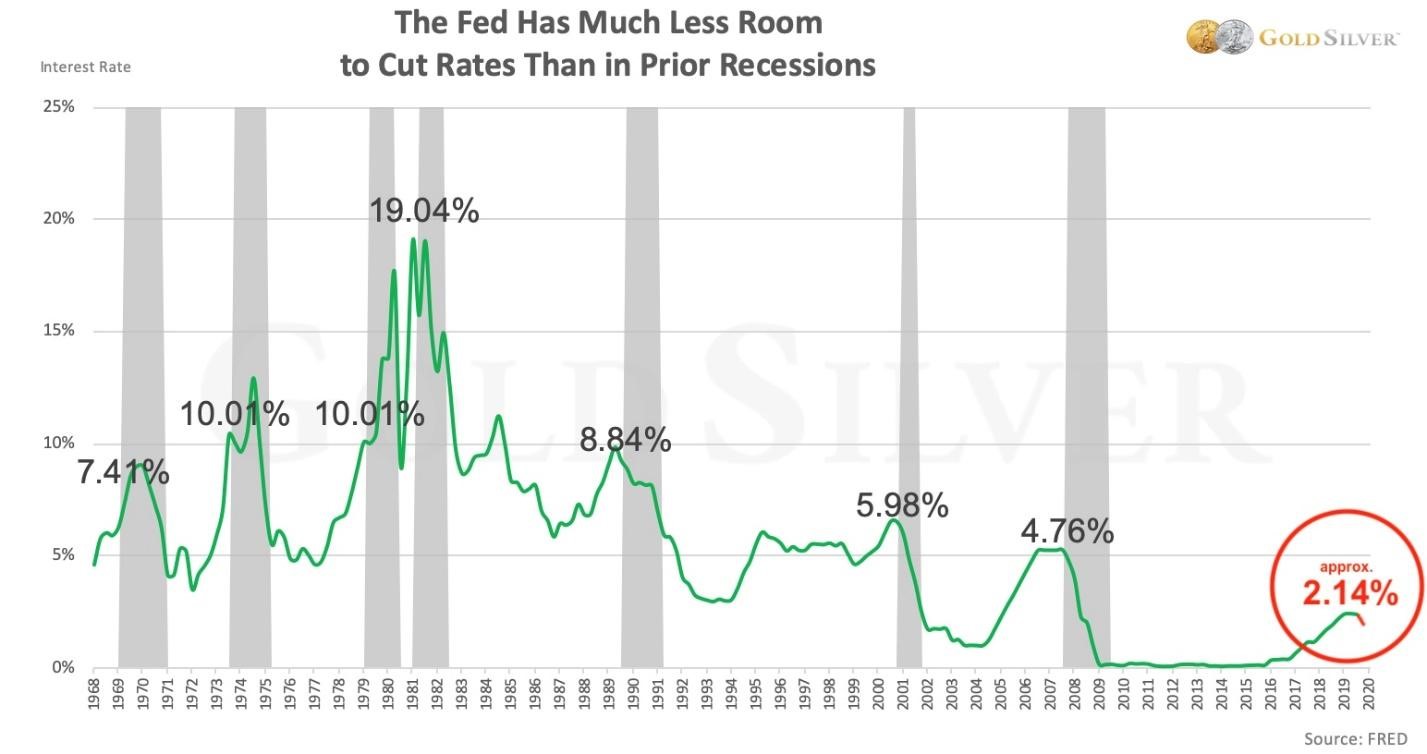 This is how bubbles get created: launch a policy that is out of whack with reality. Giving mortgages to people who cannot pay them back in the 2000s, for example. Or the cheap debt in the 1990s roaring economy. Honestly, we cannot think of a more out-of-whack decision than this one in the last 20 years.

And when bubbles inevitably pop, citizens and investors get hurt. A shortsighted central bank that’s become increasingly political, reducing its ability to battle the inevitable crisis, and extending the Everything Bubble that will damage portfolios, the economy, and most people’s standard of living.

When you see your central bank step in cow dung, your best response is to get out of the pasture—get out of their paper currency and get into physical gold and silver.

That’s what we’re doing. We’re convinced more than ever that it will pay off bigtime.