The Great Debt Binge: Trump Really Is Running the US Like a Business

One of the more durable bromides of this administration's campaign, and one only meaningful in an ironic way, is that Trump would a good leader because he would “run the country like a business.”

And he is. To be a business in America right now is take on as much super cheap debt as you possibly can and then to crow about your relatively meager, proportionally insignificant fiscal results as if you reinvented the wheel.

Spending $5.64 to make $1.00, then acting if you conjured the dollar, for free, into existence by dint of your talent, will, and charisma. What will happen to the zombie companies who have only remained in existence for years now because they could refinance at near zero percent? Bankruptcy looms for no less than 16% of the Russell 3000.

Run it like a business. All the way into the ground. 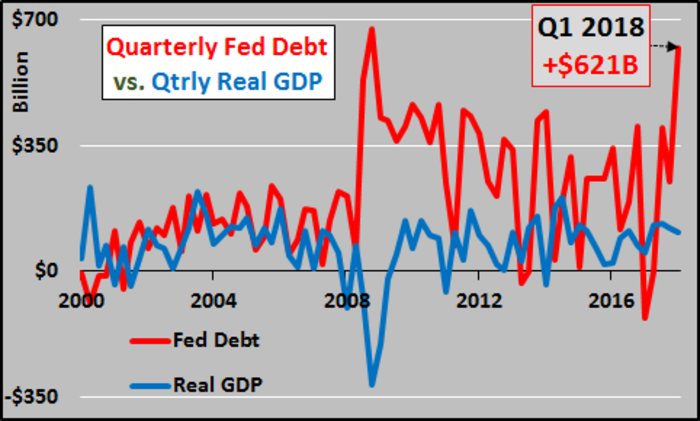 In the first quarter of 2018, the financial and investing industry went into overdrive detailing the upside of the 2018 tax cuts and the positive impacts of a "business friendly" executive and congressional branch on business in America. The stock market hit record highs and the Federal Reserve proclaimed such good times as to raise their economic outlook and increase the likelihood for interest rate hikes.

ORIGINAL SOURCE: Q1 2018 Was A Disaster For America by Chris Hamilton at Economica on 4/2/18