The Stock Market Has Never Been This Overvalued, Will Crash Over 50%

That's a bold headline. And it's true, unless "It's all different this time." Which it never has been, ever, in the history of the stock market.

One of the great Achilles Heels of blind buy and hold investing is the reliance on “average return.” The S&P, since its inception in 1923, has returned just over 12% per year. On average. As Lance Roberts points out, that number is of little relevance if you don't have a 100-year investment timeline.

What about the bleak corridor of 2000 to 2009? During that span, the S&P returned an average of -1% per year. And what if you stuck to your buy and hold guns just prior to retiring at the end of 2002? You endured a three-year stretch that offered returns of -9%,  -12%, and -22% to cap it off. How rosy would your retirement look if the last three years of your preparatory investing lopped 42% off the total you had managed to accrue all your life prior?

The knee-jerk reaction to this cautionary fright tale is “That’s all well and good, but nobody knows when those corrections are going to happen, so it’s best to just ride them out and hope for the best.”

That’s not true. The most accurate stock market predictor there is now says the S&P 500 will return -2.5%, on average, for the next 12 years. The market is beyond overvalued. The widest-scope version of Warren Buffett’s favorite valuation tool, which compares the total value of the stock market to GDP, says the market has never been more overvalued, never gripped by greater bubbled-out mania, than it is right now.

Everyone makes their own investment decisions. Like whether to remain in markets that have never been this overvalued without then crashing over 50%. Fortunately for those able to chart a path governed by critical thinking and a dispassionate perspective, there is still time to lock in all of this wild bull run’s unsustainable, Fed-driven gains, and to heed the blatant, screaming warning signs telling us to move into stores of real value, physical gold and silver, now. 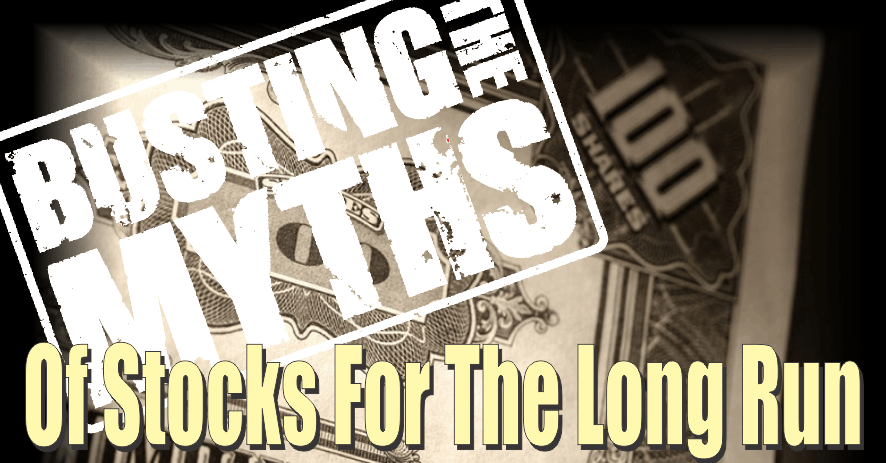 Stock markets tend to cycle between growth and decline. Passive, “buy and hold” investors who hold their investments through the cycles are likely to endure long periods of time in which they are recovering losses and not compounding their wealth.

Many of those who promote “buy and hold’ type philosophies often claim that those who dollar cost average (DCA) on a regular basis endure much shorter periods recovering previous losses. While they are partially correct, as recovery periods from losses are shorter, evidence clearly shows few individuals actually invest that way.

As discussed previously, investors do NOT have 90, 100, or more years to invest. Given that most investors do not start seriously saving for retirement until the age of 35, or older, that leaves 30-35 years for them to reach their goals. If that stretch of time happens to include a 12-15 year period in which returns are flat, as history tells us is probable, then the odds of achieving their goals are massively diminished.

Markets stand at valuations that offer very little return yet historically large risks. In the past, every market environment like the current one was met with a major correction that took years for investors to recover from. While we do not know when such a move lower will start, make no mistake markets have not suddenly become immune from “mean reversion.”

ORIGINAL SOURCE: The Myths Of Stocks For The Long Run – Part II by Lance Roberts at US Funds on 6/11/18