The US Dollar Rally Will Not Last: The Reflexivity Phenomenon

Perception can, in fact, change short term reality. If people, en masse, all place bad bets at the same time, the odds on that bet will fall to near-certainty levels. It doesn’t mean that it will actually happen, but when everyone rushes into a trade at the same time, it can make at outcome that is dead wrong seem like fait accompli.

The U.S. Dollar has been on a tear over the last few weeks. And many mainstream pundits are calling for the renewal of a dollar bull market. But I don’t think that’s going to happen – here’s why.

To start, there’s an economic theory coined by George Soros called ‘Reflexivity’ and it’s actually pretty useful. The gist is that perceptions drive reality – which in turn creates a feedback loop. Think about it as a self-fulfilling prophecy. 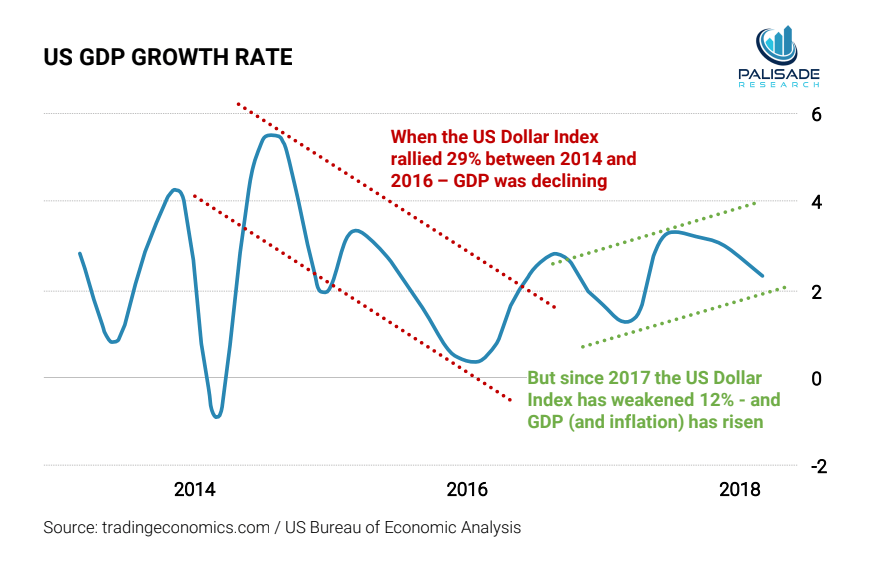 The perceptions you have make you act a certain way which change the fundamentals of things. For example, if everyone thinks there will be inflation, they will sell their dollars and buy hard assets. Which in turn pushes commodity prices higher and yields higher – thereby creating the very inflation they’re worried about.

If there is any sign of slowing growth or a systemic banking crisis, the Fed will reverse their hawkish tone and (inevitably) restart their printing presses.

Therefore, the recent Dollar rise won’t last. It can’t last for growth’s-sake. We can deduct from Trump’s words and by looking at the strengthening GDP that a weaker Dollar is what the U.S. really wants.

Once investors’ perceptions realize this reality – the Dollar bear market will resume. And the Reflexivity feedback loop that recently lifted the dollar up will against it – all the way down.

ORIGINAL SOURCE: Don’t Be Fooled By The Dollar’s Recent Rise – It’s Still Going Down Much More by Adam Tumerkan at Palisade Research on 5/10/18