The Yield Curve Inversion…and Why It Matters

GoldSilver’s Mike Maloney recently released a video dealing with inversion of the yield curve in the bond market. It’s an excellent introduction to a subject about which all investors should have a basic grasp. And it’s important enough that a few aspects are worthy of further exploration.

To begin, what is the yield curve? Simple. It’s a graph that depicts the interest rate yields on government paper, from short-dated T-Bills all the way out to the 30-year T-Bond.

Generally, the curve is a line that slopes gently upward from the shortest to the longest Treasuries. 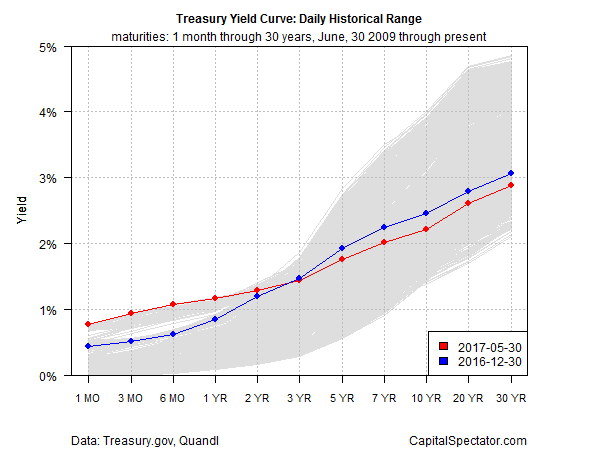 This makes sense. You, the investor, are lending your money to the government, and the government is paying you interest for the use of it. The longer you loan that money for, the greater should be your compensation, in order for you to consider it a worthwhile investment.

Another way of defining the curve is to call it a chart of risk tolerance. Normally, there is a greater degree of uncertainty concerning an investment for 30 years vs. one for three months. There is more risk involved, thus the reward must be higher.

Occasionally, however, the yield curve flattens out, and in some instances actually inverts. This means that bond investors are telling us they perceive shorter-term risks to be greater than long-term ones, and they are demanding to be compensated for their gloomier view of the near future.

So worries about the economy three years out are a bit higher than at five years. Not that big a deal.

The one to really watch is the 2-year/10-year relationship. If that inverts, it’s saying that bond investors are pretty convinced that bad things are going to happen to the economy within the next two years. In the past, it’s always been a harbinger of economic stagnation. And that matters.

Of course, no one—not even the savviest of bond investors—is omniscient. Nevertheless, if we look at a 2-year/10-year chart over time, its value as an economic indicator is beyond question. When times are good, that curve never inverts. And when it does, it has predicted an oncoming recession with deadly accuracy. The following chart shows the most recent five recessions, and if you extended it back a little further, you’d find that inversion preceded the recessions of 1970-’71 and ’74-’75, as well.

That’s a pretty clear crystal ball, and it caused Bloomberg to write that this “has understandably fueled concerns about a potential slowdown in U.S. growth and, with that, a higher risk of a policy mistake by the Federal Reserve.”

Not everyone is buying that line, though. Former Fed Chair Janet Yellen, for one, begs to differ (full disclosure compels us to note that the Fed’s perpetual rose-colored glasses when it comes predicting recessions has made it so they pretty much never see a recession coming). Yellen: “Now there is a strong correlation historically between yield curve inversions and recessions, but let me emphasize that correlation is not causation, and I think that there are good reasons to think that the relationship between the slope of the yield curve and the business cycle may have changed.”

And Mohamed A. El-Erian, the former CEO of premier bond trader PIMCO, weighed in with “Eight reasons why the information content of the curve’s shape may be less than implied by history.” El-Erian, along with many others, is persuaded that the economy remains strong; and he believes that the yield curve will normalize in the coming months.

Plenty of analysts are not as sanguine as Yellen and El-Erian. Karl W. Smith, a senior fellow at the Niskanen Center, wrote on Bloomberg, on the occasion of the inversion of the 3-year/5-year: “Does that mean that the U.S. is on the verge of recession? My answer: yes, probably. But, as with so much else, a lot depends on how the Federal Reserve reacts.”

One big question to which there is no consensus answer among economists is: why is there such a correlation between rate curve inversion and recessions in the first place?

Karl Smith’s opinion: “The mainstream view is that the yield curve inverts because the markets expect the Fed to cut interest rates once the economy starts to slow down. Traders want to lock in relatively high rates now so that they will be protected from future declines…

“Still, this explanation raises a deeper question. If the yield curve is inverting because bond traders believe that the Fed will lower rates in the future to fight an imminent recession, then why doesn’t the Fed simply lower interest rates now and avoid the recession altogether?

“The answer, I think, is that the inverted yield curve indicates that the Fed’s current policy has already begun to cause a recession. An inverted yield curve is telling us that short-term rates have risen above the long-run natural rate of interest and that, one way or another, short-term interest rates are going to have to fall. And they will fall either because the Fed recognizes its mistake and lowers them in time to avoid a recession, or they will fall because the Fed fails to see its mistake and leads the economy into recession.”

Which is more likely?

Well, as noted earlier, the Fed’s ability to foresee and forestall recessions—which is its job, after all—has left a lot to be desired. (Recall Fed Chair Ben Bernanke’s denial of a coming recession in March of 2007, when he said: “At this juncture ... the impact on the broader economy and financial markets of the problems in the subprime markets seems likely to be contained.”)

At present, the Fed claims to be committed to continually raising the federal funds rate, up to 3.5% in 2020. Is this a big overreach with a looming inversion in the 2-year/10-year curve? Has the Fed overestimated the strength of a US economy that is showing some early signs of slowing?

And there you have the oppositional viewpoints. Is the Fed correct that economic growth mandates that fighting inflation must take precedence over staving off recession? Or is the flattening yield curve correct that a recession is coming in the not-distant future? We’ll find out—the hard way.

But in the meantime, it won’t hurt to keep your eye on the 2-year/10-year curve and see if it inverts. And if it does? Well, a recession probably won’t be imminent, if history is any guide. This has proven to be a very early warning signal.  But we should address the question of how far off recession usually is when the inversion happens.

Let’s take a look back 11 years. Worried about an asset bubble in the housing market, the Fed had been raising the funds rate since June 2004, and by January of 2006, it stood at 4.25%. That’s when the curve first inverted. The Fed took no notice, continuing to raise the funds rate to as high as 5.25% in June 2006. The curve flip-flopped back and forth, between inverted and flat, for the next year. By September 2007, the Fed finally became concerned, and it lowered the rate a half point, to 4.75%. That was a big move but, as we now know, it was too little too late. The Great Recession began three months later.

There are obviously no hard and fast rules here. But in general, it seems safe to say that 1) recession follows yield curve inversion by somewhere between 11 and 23 months and 2) it may or may not stay inverted until the recession arrives.

If the present echoes the past, and if the 2-year/10-year curve does invert in the next couple of months, then we may expect recession sometime in 2019 or ’20.

But a great deal depends on what the Fed does. And given their change-by-the-day rhetoric, what that will be is anybody’s guess.