If any of us lived in houses that had the kind of ceilings the federal government has, our houses could collapse in short order. They are less “debt ceilings” than “minor and easily ignored yield signs we have to pay lip service to before we issue more debt.”

So over the next five months, if all goes according to plan, the US gross national debt of $20.5 trillion (which includes $14.8 trillion in publicly traded Treasury securities and $5.7 trillion in internally held debt) will surge to about $21.1 trillion. 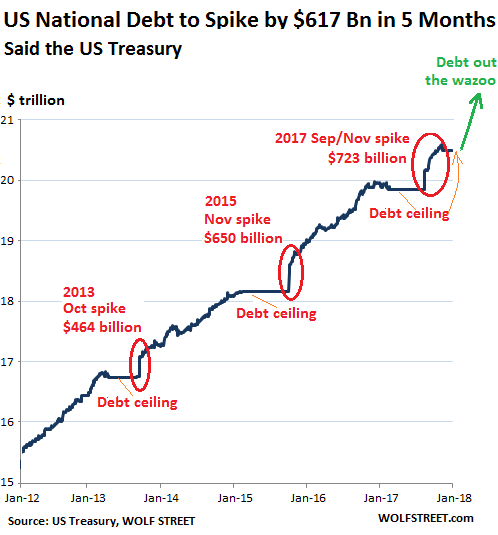 That’s right. This if the best-case scenario, if “everything goes according to plan. And what a plan!

The 10-year yield just hit a four-year high. Mortgage rates are rising. With the massive additional treasury supply, higher and higher rates will be required to pique new interest, and you can bet some beleaguered T-bill holders will see the writing on the wall, tap out, and move into gold.

ORIGINAL SOURCE: US National Debt Will Jump by $617 Billion in 5 Months by Wolf Richter at Wolf Street on 1/30/18