When GDP - Debt Is a Negative Number: These Are the Good Times?

It is the elephant in any conversational room regarding the US economy.

If you were allowed to print money, at will, in the privacy of your own home, would you then feel justified bragging about the remarkable economic success you had achieved? All of the US economy's past decade of "success" and "recovery" has been a simple, and total, charade.

It’s a wonder, given the $14 trillion dollars the Fed has spent to prop up the economy, that it’s not in far better shape than it is. The hole is dug. The only way out requires a tremendous amount of sacrifice and restraint. Which is the opposite of what we’ll get from this administration and its Fed: runaway debt spending and no accountability.

Remove the stimulus and GDP collapses up to 7%.

Meantime, the latest IMF report draws a grim sketch of the approaching scenery.

IMF director Vitor Gaspar says the “United States stands out” as the only advanced country planning on a rising debt burden in the years ahead. 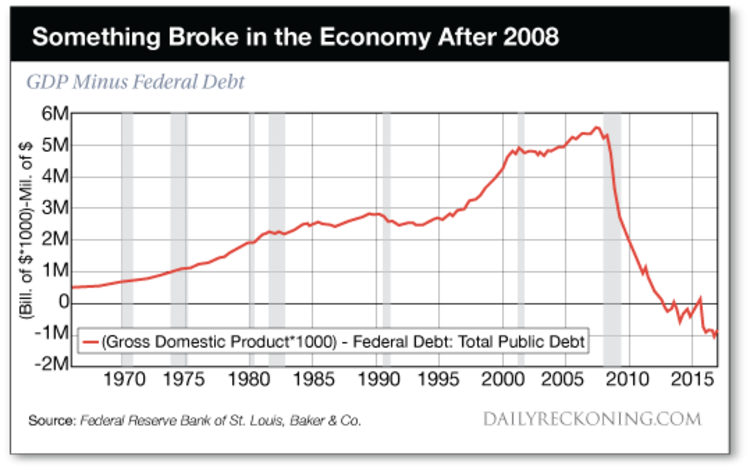 The culprit being the Trump tax cuts… twinned with massively increased government spending.

We can only conclude that something is still broken in the economy… and will stay broken for the foreseeable future. The problem at this point appears to be the problem of having the tiger by the tail.

The economy requires constant injections of debt to sustain the appearance of growth. But if that debt only burdens the economy without producing any authentic bang…

Is it not better to stop now, before the tiger grows larger — and hungrier? Maybe the time has finally come to let the tiger go.

Our only advice is this: Be prepared to run… and pray…