Super-high interest rates in the 1970s look like something out of a financial science fiction novel at this point. As savvy mortgage refinancers have ground out extra quarter points in ZIRP era, double-digit mortgage rates seem like a vestige of the financial Wild West.

But overall household debt levels were so much lower back then. Exponentially so. Inflation now, in a hyper-leveraged world, would have inestimably more damaging effects.

Rates are ultimately directly impacted by the strength of economic growth and the demand for credit. While short-term dynamics may move rates, ultimately the fundamentals combined with the demand for safety and liquidity will be the ultimate arbiter.

What is clear is that the rise in rates in the 60-70’s was combined with rising inflationary pressures driven by rising wages and ultimately economic growth. It was also a time where very low indebtedness allowed rates to rise without severely negative consequences. 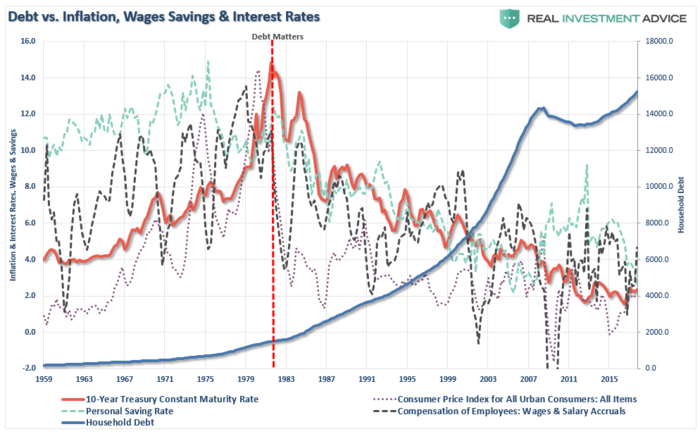 With households, corporations, the government and investors more levered today than ever before in history, the rise in rates is the “fuse” that will eventually ignite the next major reversion. As I discussed yesterday, that epicenter of that reversion will be pension funds.

When the $4-5 Trillion in required bailouts for pension funds begin, not to mention potential bailouts of mortgages, auto loans, and student loan debt, the demand for Treasuries will surge sharply driving rates lower once again. The next rounds of Quantitative Easing will dwarf what we have witnessed over the last decade.

What is clear is that sharp increase in interest rates, particularly on a heavily levered economy, has repeatedly led to negative outcomes. With rates now at extensions only seen in 7-periods previously, there is little room left for rate acceleration before such an outcome spawns.