“You Stupid Gold Bugs! Trade War Risks Are Over So Sell Your Gold”

I was stupefied at what I was reading…

A Bloomberg article earlier this month reported that JP Morgan and Citibank were significantly reducing their gold positions or closing them out entirely. Based on the article, it seems they made this decision based on the flimsiest of changes in the market:

I’m flabbergasted that those were the reasons they closed out their gold positions. What are they, amateur traders who react in knee-jerk fashion to the latest twist in the news?

I sometimes think that you and I, with the education Mike Maloney has provided, along with a little study of history, are better equipped to make sound investment decisions than those guys.

So let’s clear this up. Regardless of the trade-war status, gold is sitting on a veritable powder keg of potential catalysts that could send it in the other direction—up. There are so many elevated risks that there has hardly been a more opportune, and necessary, period in history to own it.

Borrowing a trick from our friends at CPM’s 2019 Gold Yearbook, the chart below shows the risks that have served as catalysts for gold thus far (green), and some of the major risks that have not yet transpired (red). I also list the probability of these risks in my assessment, as well the impact they would likely have on the gold price. 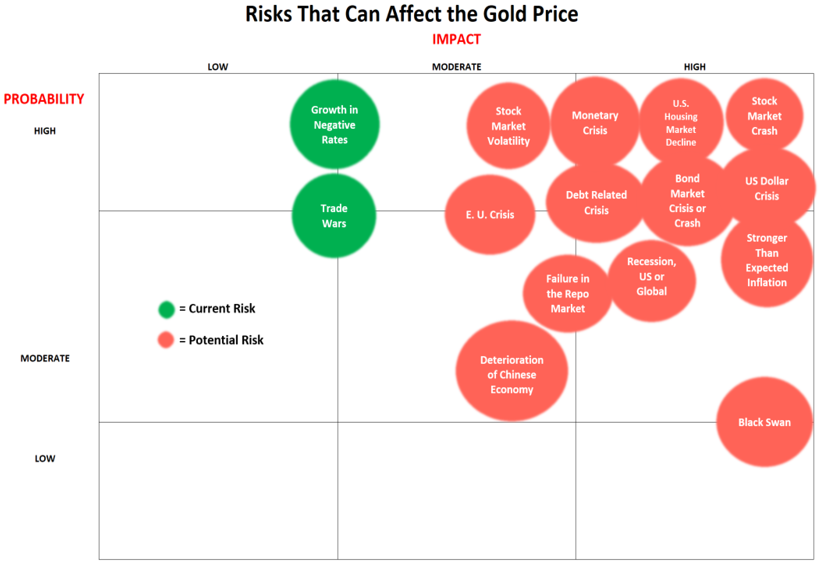 In other words, there are numerous risks that could impact gold in far bigger ways than what we’ve seen so far.

Further, that list of risks is not a bunch of isolated events… any one catalyst could ignite another, starting a snowball effect that gains steam and runs over any portfolio that isn’t positioned properly to withstand it. See 2008.

To state the obvious, numerous risks remain embedded in the financial system, all of which are elevated, any one of which would push gold sharply higher if and when realized.

The table is a judgment call on my part, of course. But these risks should be plainly obvious to any professional investor, but apparently aren’t. Maybe us regular Joes really are better at investing than the average Wall Streeter.

And by the way, so what if China took a break from buying gold for their Reserves—what about next month? And the month after that? By any measure China needs more gold. And do they know that India has been loading up on silver? Last, do they really think the trend in negative rate debt is over? Maybe they should pay more attention to what the big boys are doing.

To be sure, there are those in the mainstream who are aware of and concerned about these risks. Nobel Laureate and Yale university economics professor Robert Shiller recently said, "I see bubbles everywhere.” Even the asset management division of JP Morgan said, “The days of simply insulating exposure of risky assets with an allocation to bonds are over.”

You may be tired of hearing about another “buying opportunity” in gold, but the market doesn’t care what you think. What matters is how well prepared you are when the reasons we all hold gold strike with force. The above table says this is highly likely, if not inevitable.

So no, JPMorgan and Citigroup, I won’t be selling my gold. You’ll be buying back soon anyway, when the next catalyst kicks in. I wonder what your bosses will think when you are forced to pay a higher price?