The Stress Signals of The Global Credit System Are Flashing

As American companies who have served as international lenders repatriate their dollars to avoid Trumpian penalties, the three-month Libor rate is soaring.

Who cares, in America, at what rate London banks loan money to each other over the short term? Many US debt vehicle rates are directly tied to it:

A third of all US business loans are linked to Libor, as are most student loans, and 90pc of the leverage loan market. Stress signals of the global credit system are flashing amber. The offshore dollar funding markets that lubricate world finance are facing an incipient squeeze.

The three-month rate for dollar Libor (London Interbank Offered Rate) used to price a vast nexus of financial contracts around the world has spiked to a 10-year high of 2pc this week, 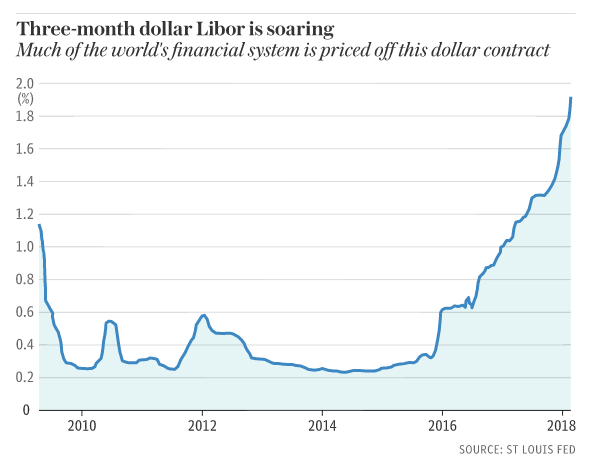 ORIGINAL SOURCE: Libor surge is nearing danger level for debt-drenched world by Ambrose Evans-Pritchard at The Telegraph on 2/28/18