According to Deutsche Bank, Here's What's Going on With the Dollar

According to Deutsche Bank, Here's What's Going on With the Dollar

There are other technical reasons out there but while most on Main Sreet and some on Wall Street have been scratching their heads as to why the dollar has been in a precipitous decline when the Fed has been jacking rates and yields have been rising, an FX strategist George Saravelos at Deutsche Bank has come up with an answer. 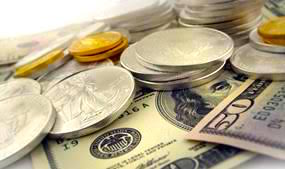 Bellow are his key points.

“How can it be that US yields are rising sharply, yet the dollar is so weak at the same time? The answer is simple: the dollar is not going down despite higher yields but because of them. Higher yields mean lower bond prices and US bonds are lower because investors don't want to buy them. This is an entirely different regime to previous years.”

“Dollar weakness ultimately goes back to two major problems for the greenback this year. First, US asset valuations are extremely stretched. A combined measure of P/E ratios for equities and term premia for bonds is at its highest levels since the 1960s. Simply put, US bond and equity prices cannot continue going up at the same time. This correlation breakdown is structurally bearish for the dollar because it inhibits sustained inflows into US bond and equity markets.”

“The second dollar problem is that irrespective of asset valuations the US twin deficit (the sum of the current account and fiscal balance) is set to deteriorate dramatically in coming years. Not only does the additional fiscal stimulus recently agreed by Congress push the fair value of bonds even lower via higher issuance and inflation risk premia effects, but the current account that also needs to be financed will widen via import multiplier effects. When an economy is stimulated at full employment the only way to absorb domestic demand is higher imports. Under conservative assumptions, the US twin deficit is set to deteriorate by well over 3% of GDP over the next two years.”

“The mirror image to all of this is that the flow picture into both Europe and Japan has been improving dramatically anyway. We have previously written about the positive flow dynamics in Europe as the flow distortions caused by extremely unconventional ECB policy are starting to adjust. But the Japanese basic balance has also shot up to a 4% surplus in recent years helped by a big improvement in the services balance (Chinese tourists) and a collapse of Japanese inflows into the US: treasuries simply do not provide enough duration compensation anymore. To conclude, embrace dollar weakness, it has more to run.”

So there you have it as to a few of the reasons why gold and silver will be moving up much higher.

ORIGINAL SOURCE: Blame the dollar on yields – Deutsche Bank by  Sandeep Kanihama of fxstreet.com on 2/16/18