Imagine if the Fed, at its regularly scheduled quarterly rate-cycle interval, raised interest rates by half a point twice in a row.

Wall Street would go insane. The financial press would lose their minds. A corporate debt crunch of unfathomable proportions would start in earnest, as zombie companies existing only via ZIRP debt could no longer afford life support and went bankrupt (which is going to happen anyway, just a little more slowly).

That’s what the big banks have done the American consumer in the past six months. A 1% raise, even as default rates are already increasing. 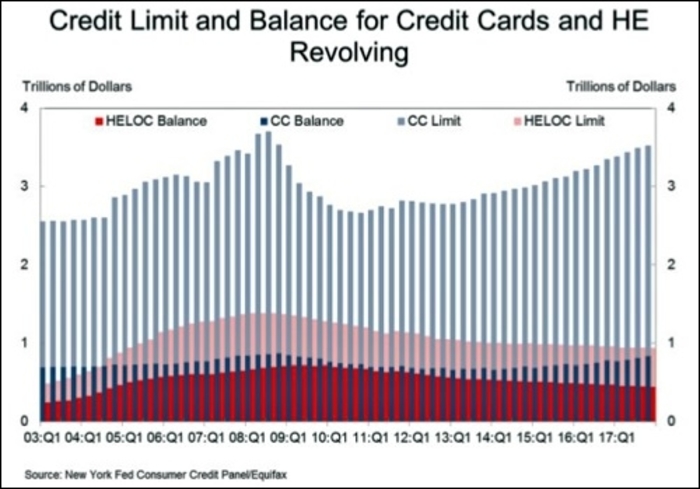 Last Thursday, President Trump told a union crowd in Ohio that the U.S. is enjoying “the greatest economy we have ever had.” If that is so, why is Trump piling on more national debt to boost the economy through fiscal spending?

The answer appears to rest in the fact that much of the economic growth in the United States is being financed by consumer debt. The serious threat to that economic growth is that interest rates are rising on big chunks of that consumer debt with virtually no restraints on what the mega Wall Street banks can charge to struggling Americans.

According to the 2017 year-end study on “Household Debt and Credit” from the Federal Reserve Bank of New York, household debt has increased for 14 consecutive quarters and now stands at $13.15 trillion, an historic milestone that eclipses the former peak of $12.68 trillion that occurred in the third quarter of 2008, in the midst of the greatest financial crash since the Great Depression.

The report notes two troubling trends: credit card balances that are more than 90 days delinquent have “been increasing notably from the last year” and student loans that were 90 or more days delinquent or in default in the fourth quarter of last year reached 11 percent of student loan debt outstanding.

At the end of 2013, the average interest rate being assessed on credit card accounts was 12.95 percent according to the Fed report. As of November 2017, according to the latest data released by the Fed, that rate had increased to a whopping 14.99 percent, which is a full percentage point higher than six months earlier.

For an already tapped out consumer, this kind of credit shock presents both a direct danger to the U.S. economy and an outrage to the American public that belatedly learned in 2011 that these mega banks had been bailed out by the Fed to the tune of $16 trillion in almost zero interest rate loans during the financial crisis.

ORIGINAL SOURCE: Are the Big Banks Putting a Gun to the Head of the U.S. Consumer – Again? by Pam Martens and Russ Martens at Wall Street on Parade on 4/2/18