If you’ve been a gold investor for any length of time, you’re keenly aware of China’s veracious appetite for gold. And nothing speaks more about the country’s runaway demand than withdrawals from the Shanghai Gold Exchange (SGE).

That’s because those withdrawals represent physical metal. Instead of playing with paper like we do in the West, many Chinese investors on the SGE take delivery of metal once the trade concludes. We don’t know exactly where it all goes, but it’s a safe bet that the bulk of it ends up in government reserves, and with institutional and private investors.

The numbers for 2016 are out, so I thought I’d take a look. The amount of physical metal withdrawn is actually down from the record setting year of 2015—most headlines you’ll see on the subject predicted this, and it’s true.

But withdrawals are still very high. 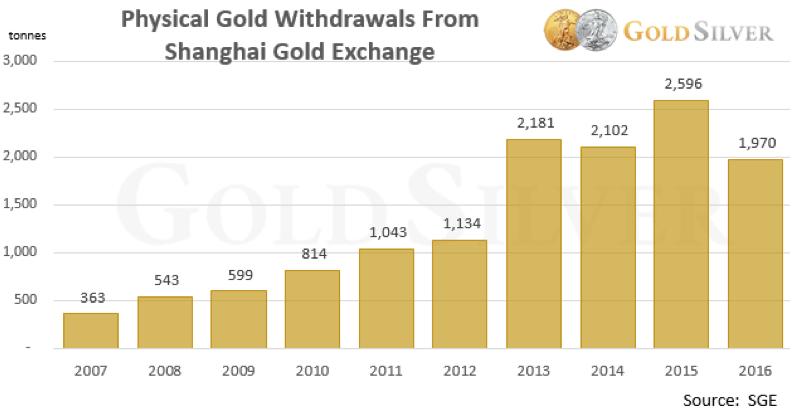 Chinese investors withdrew over 63.3 million ounces of gold from their primary gold exchange in 2016, the fourth highest on record.

To put that in perspective, it’s 64 times more than all of the gold Eagles sold by the US Mint last year.

Another way to look at it is this: check out how much of total global gold production those withdrawals represent. 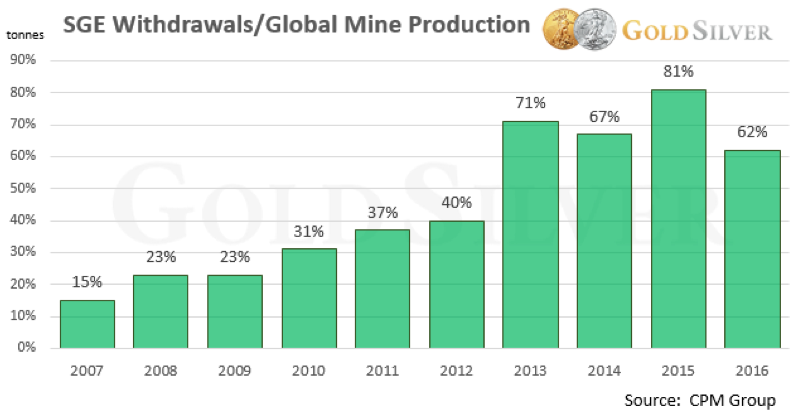 Even though you’ll see headlines about “falling” gold demand in China, the country still gobbles up nearly two-thirds of worldwide gold production. The story isn’t that demand is down, but rather that it remains elevated.

And here’s one of the bigger reasons why…

There’s a lot that can be said about China’s motivation to buy gold, but certainly one of those reasons is due to currency devaluation.

The fall in the yuan is bigger than many investors realize. Look what’s happened to the value of the yuan against the US dollar.

The yuan just logged one of its worst annual losses against the dollar in more than two decades.

The currency has been falling because Chinese leaders have deliberately cheapened it to boost their economy. A cheaper currency makes exports more competitive.

But this deterioration has had other ramifications, too, particularly with investors. It’s pushed them to seek out other investments for their savings, one of which is gold. That’s why withdrawals of physical metal from the SGE have been so high.

The trend of snapping up gold shows no signs of stopping, either. In just one week earlier this month, $52 million poured into a Chinese gold ETF. Bloomberg reported it was “the biggest inflow into a commodity-linked ETF of all countries.”

Chinese investors aren’t buying gold only because their currency is falling, but also because there’s a lack of other alternatives. Here’s how one UBS analyst puts it:

“Deterioration in China's macro backdrop could trigger flows towards gold; there are a limited number of investment alternatives and gold is poised to benefit should outlooks across the different options turn sour.”

Make no mistake: if the yuan continues to fall—which is what many analysts predict it will do—Chinese investors will continue to hedge with gold.

It’s not just currency risk they face, either. The International Monetary Fund (IMF) warned that China’s “continued reliance on policy stimulus measures and the slow progress in addressing corporate debt raise the risk of a sharper slowdown or disruptive adjustment.”

In IMF speak, that means fiscal and market risk in China is growing, too.

All signs point to China remaining hungry for gold. We should expect withdrawals of physical metal from their exchange to remain high. Which means they’ll continue taking a large chunk of global production off the market. They already don’t export much metal, in spite of being the world’s top producer, so that metal never leaves the country.

Sooner or later all of this will matter to the gold market. We are drawing closer to a day when China’s influence over the gold price will be as great as the US. And then it’ll surpass it. China’s hunger for gold is a long-term trend that will have major ramifications for the market.

If you’re a gold investor, China is one of your biggest partners. I recommend investing right alongside them.