Inflation Into Falling Demand: US Consumer Is Tapped Out

Without the fake demand generated by QE, where, exactly, will US economic demand come from?

As inflation sets in, it does so in tandem with the worst possible counterparty: sharply flagging consumer demand. Stagflation, writ large. When nobody's buying stuff but prices are going up anyway, and the Fed is raising rates, you have the bleakest macro environment of them all.

What a difference two months makes. Back in January, with jobs aplenty and Americans spending like drunken sailors (sending their savings rate to the lowest on record), average hourly earnings suddenly spiked, unleashing the February VIXplosion over concerns that the Fed is behind the curve and will be forced to hike much more aggressively.

Well, fast forward to today, when all those "green shoots" are either dead or on the verge, and after today's Personal Income and Spending report, it appears that it is stagflation that is once looming.

For those who missed it, yesterday we showed that that "Conference Board 'Plans To Buy' Homes, Autos, and Appliance have all plunged in the last three months: 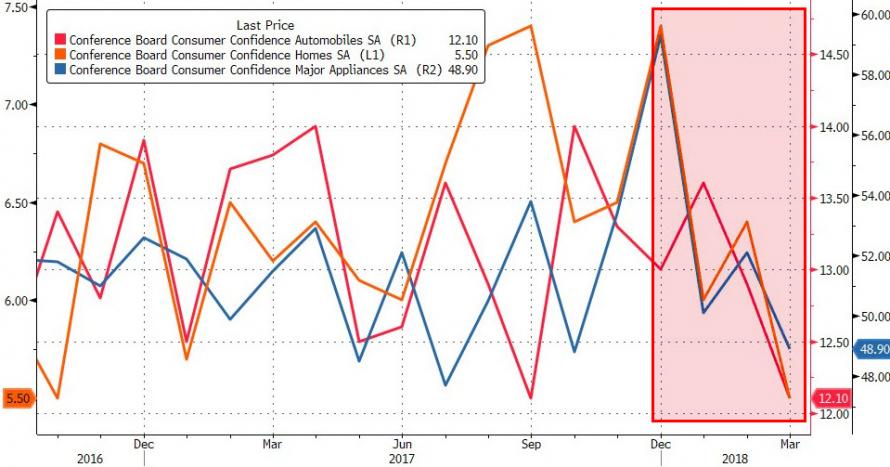 First, core PCE, the Fed’s favorite inflation gauge, rose 1.6%YoY in February 2017; the biggest gain since April 2017. Meanwhile, the PCE deflator rose by 1.8%, coming hotter than expected, just as the cellular service price collapse falls out of the Y/Y data, sending annual inflation higher by 0.3%, and is set spook the next set of CPI data. In other words, inflation is here.

Then there is the US consumer's reaction, and while until just a few months back the US savings rate was at all time lows, it has since jumped to 3.4%, the highest since August 2017, as households are no longer spending more than they can afford, a theme we observed at the end of 2017. This also means that spending is lagging income for 3 consecutive months, as something appears to have spooked American consumers.

ORIGINAL SOURCE: Stagflation Alert As Wages And Salaries Roll Over by Tyler Durden at Zero Hedge on 3/29/18