It’s so easy to scoff at this move, such a brazen attempt to deceive. It is not all that different from conjuring money out of thin air, as the Fed does with impunity. The difference between Venezuelan currency and US currency is that the dollar is backed by the “full faith and credit of the US government,” as is printed on every bill.

Faith. That’s it. The bolivar isn’t worth anything because nobody has any faith in the Venezuelan government at this point. How much faith do you have in the current cadre in D.C.? This is why silver and gold have stood the test of time. Immune to human frailty and shenanigans.

Venezuela’s President Nicolas Maduro ordered a re-denomination of the ailing bolivar currency on Thursday, by knocking three zeroes off amid hyperinflation and a crippling economic crisis. 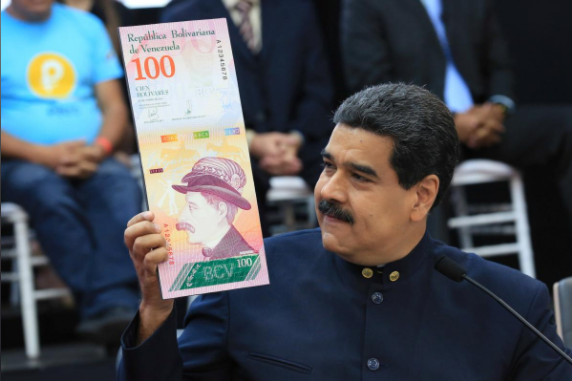 The measure to divide the so-called bolivar fuerte - or “strong bolivar” - currency by 1,000 would take effect from June 4, the socialist leader said. It would not have any impact on the bolivar’s value.

The move illustrates the collapse of the bolivar, which has fallen 99.99 percent against the U.S. dollar on the black market since Maduro came to power in April 2013. A $100 purchase of bolivars then would now be worth just a single U.S. cent.

But Maduro, 55, presented the move as a positive development intended to protect Venezuela against currency speculators and a U.S.-led “economic war” against the OPEC member.

Critics said the currency measure was no panacea for Venezuela’s economic mess and just a psychological ploy to make Venezuelans forget the extent of the hyperinflation.

ORIGINAL SOURCE: Venezuela knocks three zeros off ailing currency amid hyperinflation by Corina Pons and Deisy Buitrago at Reuters on 3/22/18