Ken Rogoff: Center of the Next Global Financial Crisis Will Be China

ORIGINAL SOURCE: Ken Rogoff Warns "China Will Be At The Center Of The Next Global Financial Crisis" by Tyler Durden at Zero Hedge on 1/24/18

Professor of Public Policy at Harvard University, Ken Rogoff is not noted for alarmist warnings. Which makes his statements in Davos regarding the Chinese economic time bomb especially noteworthy.

The incipient crisis in China, where the fragile, non-free-market, state-enforced economic system is beginning to fray, is getting increasingly tenuous:

I still think China is the most fragile large region in the world at the moment. The big problem is that the Chinese economy is still very imbalanced, relying much too heavily on investment and exports. In addition to that, China is very credit dependent. So if China were to run into financial difficulties or just experience a slowdown in the rate of credit growth that could produce a lot of problems. And if China were to run into its own kind of financial crisis it would probably produce a growth crisis which could produce a political crisis.

Also striking is Rogoff’s take on interest rates and their correlation to future stock market performance.

"If interest rates go up even modestly, halfway to their normal level, you will see a collapse in the stock market.”

When the author of This Time Is Different: Eight Centuries of Financial Folly tells you that the most likely Fed action will result in a stock market collapse, it’s time to listen.

Please read the rest here; Ken Rogoff Warns "China Will Be At The Center Of The Next Global Financial Crisis" 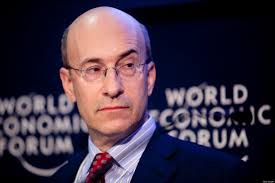