These are the nominal best of times. You can build a pretty amazing Potemkin economy if you keep it utterly awash in nearly interest-free debt for 10 years. Short term, you’re rigging impressive-looking headline results. Medium to long term? You’re sowing the seeds of economic disaster.

What happens when there is an actual crisis and we find that the magic free debt spigot no longer works? That there are actual consequences to flagrant manipulation of currencies and economies?

The national debt has grown by more than $1 TRILLION… just in the last SIX MONTHS.

I’m scratching my head right now wondering– where did they spend all that money? Was there a major economic crisis, wave of bank failures, or severe depression that required massive fiscal stimulus?

Nope. It was just business as usual. 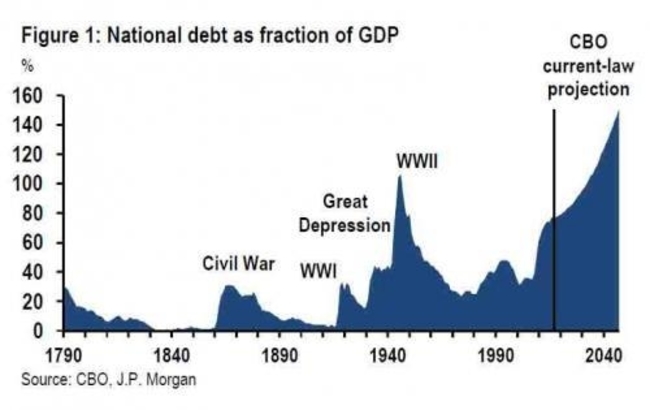 Even better, the economy was supposedly doing totally awesome over the last six months.

And yet, even with all that positivity, the government still managed to rack up an extra trillion dollars in debt.

One important point to make is that debt growth is VASTLY outpacing GDP growth. And this is critical to understand.

Over the course of several years, that effect compounds into something that’s quite nasty. At the end of 2008, for example, the size of the US economy was $14.5 trillion. A decade later, the size of the economy is $19.7 trillion, 36% greater.

Yet over the past ten years, the national debt has grown from $9.4 trillion to over $21 trillion– a growth rate of 123%!

ORIGINAL SOURCE: At $21 TRILLION, the national debt is growing 36% faster than the US economy by Simon Black at Sovereign Man on 3/19/18