Please Board Rocket Prior to Takeoff; Time to Accumulate Gold is Now

One of the most formidable precious metal market enemies (and it’s especially odd to note this in our current stock market environment) is boredom. Sometimes numbing sideways trading that seems like it will never end.

Which is exactly now the VIX was before it exploded 85% in a day in February. Gold’s historic 1000%+ surge from 2002 to 2010 was preceded by positively stultifying years of price non-action. Don’t let impatience in the face of wider volatility make you miss gold’s next parabolic move higher. 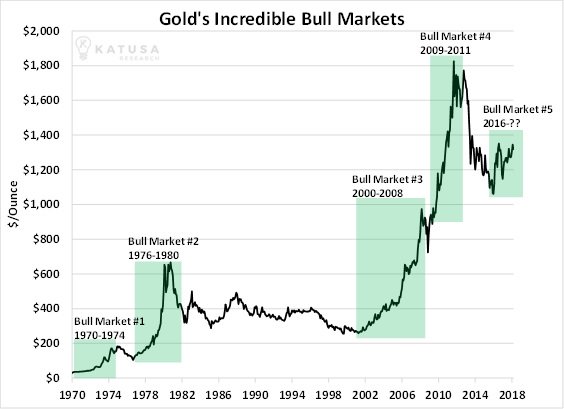 Gold bull markets all follow a similar pattern where prices start a steady climb and then begin to accelerate faster and faster. Obviously, you want to get in as early as possible. But most investors don’t understand when the switch from bear to bull actually happens.

If you don’t know what you’re doing it’s easy for the start of a new rally to look like it’s still part of a downtrend. On top of that, emerging countries like China and India are buying up gold bars at unprecedented rates…and the price of mining gold continues to soar higher and higher.

If this system keeps chugging along, then the $7 trillion that central banks around the globe have pumped into the markets over the last 8 years is almost certainly going to kick-off a massive wave of inflation, sending gold prices soaring.

Global fears continue to rise with the doomsday clock closer than ever to midnight with the threat of Nuclear War in the Middle East and North Korea.

Now, just imagine if the Fed raises interest rates and pops the stock market bubble…investors are going to come fleeing into the one safe haven that’s stood guarding your wealth over the last 4,000 years…gold.

ORIGINAL SOURCE: Gold is a Sleeping Giant You Can’t Afford to Miss by Marin Katusa at Katusa Research on 3/20/18