Print It, and They Will Buy: Trade Deficit 2-Step in the Age of ZIRP

The trade deficit is the administration’s boogeyman du jour; suddenly, per Trump, it’s a gigantic problem that is to blame for everything and it’s all China’s fault.

But exactly what should a president expect to happen in a nation where money has been abundant and free for the borrowing for 10 years? A 63% jump in trade deficit size seems sensible, if not outright tame, given the amount of free debt Americans have been able to feast on since 2008.

You can’t have it both ways. You want a debt-fueled economy with roaring headline numbers you can take credit for? Or do you want a small trade deficit? Because you can’t have both.

President Trump talks about the U.S. trade deficit all the time. He recently proposed new tariffs on steel and aluminum as one way to help lower the trade deficit that has contributed to shrinking American growth in these industries. With so much attention being paid to one economic number, now is a good time to understand how the trade deficit has changed over the decades. 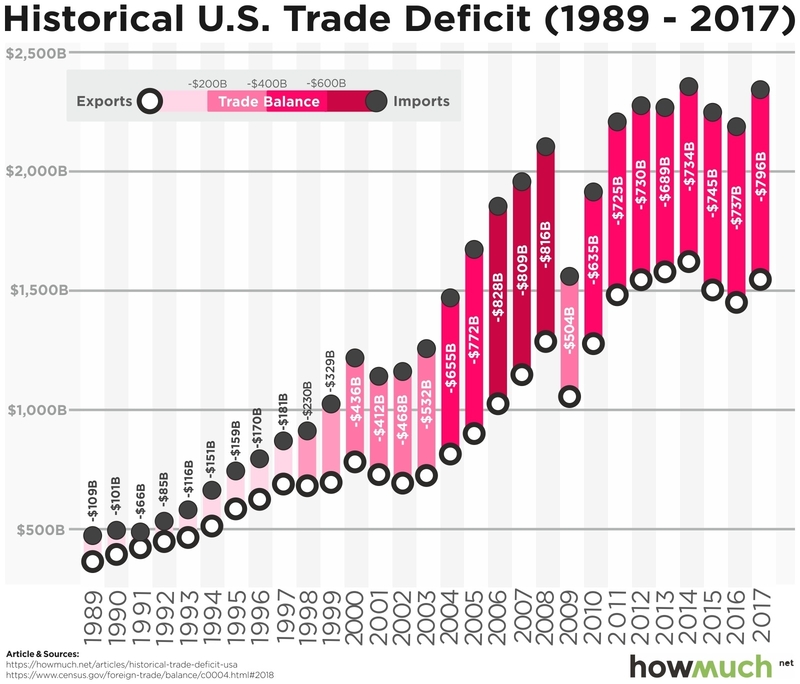 One thing is immediately clear: imports and exports are both on an upward trajectory year over year, but imports tend to grow faster. In other words, when looking at the graph you will notice the gap between the two numbers has gotten larger and larger while the space between the two circles has also become darker and darker.

Economists care about the trade deficit because it helps answer several important questions about the economy. For one thing, to what extent does a country rely on manufacturing, as opposed to consumption, for growth?

Note that, interestingly, countries that export a lot more than they import don’t automatically have the best economies. For example, Thailand (+$44B), Russia (+$41.5B), and Nigeria (+$7.7B) all have trade surpluses, but there’s no chance any of them will overtake the U.S. in per capita income anytime soon. The $800B trade deficit is a problem, but clearly the macroeconomic health of the country is more complicated than a single number might lead you to believe.

ORIGINAL SOURCE: Visualizing Thirty Years of the U.S. Trade Deficit in One Graph. It is Still Huge Under President Trump at howmuch.net on 3/22/18

Coronavirus Cases Are Falling Globally, but the Big Question Is: Why?
More News