Former Congressman Ron Paul came out swinging today on the U.S. Deficits and the easy monetary policy that fed has been carrying on. Everything is burdened with debt according to Paul and will net end well. He goes on to say don't be surprised if the market crashes by 50 percent.

"If the Fed continues on the things that they are sort of planning on doing, it's going to be a calamity," he said Monday on CNBC's "Trading Nation." "I think we have a greater distortion and a financial danger sitting out there bigger than ever before."

Paul, who has also served as a Texas congressman, says the Fed has made critical policy errors that have helped caused a "rigged economy." They range from keeping interest rates low for too long, the rounds of quantitative easing and timing of selling its financial-crisis era assets.

"The correction is going to be huge, and I don't think anybody can predict. But I think this correction we had in '08 and '09 wasn't allowed to really go its course and restore some sensibility to the market. I think that'll be a mild correction to what could happen," Paul said. 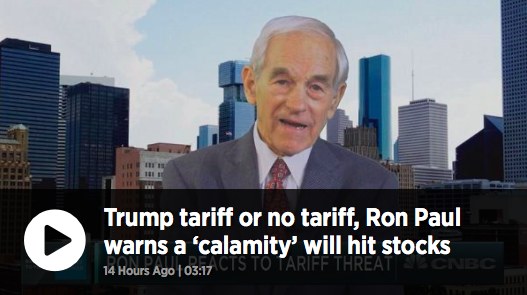 ORIGINAL SOURCE: Ron Paul warns that market dangers are 'bigger than ever,' even if Trump backs away from tariff threat by Stephanie Landsman of cnbc.com on 3/6/18