Swiss National Bank's Profits Over Half the Fed's; GDP 1/27th the Size

It’s called “mission creep.” When an organization whose stated purpose is to do one thing, but over time, somehow ends up headed in a completely different direction.

The Fed was never intended to function as an enormous asset-buying enterprise, but it has mutated into that over the past 100 years, and when compared to some of its peers, its results are abysmal.

In the Middle Ages, alchemists dreamt of untold riches by trying to turn lead into real gold. Modern technology has made that dream come true. Among the dreamers, the Swiss National Bank is one of the largest. It turned its $800 billion stock and bonds portfolio into $55 billion profit. Good banking? Not quite.

While a central bank is supposed to be a regulatory agency, global central banks are becoming investors by buying up stocks and bonds, especially high-yield government bonds. How do central banks purchase these assets? By creating new money and manipulating the currency. It’s as easy as that. See the chart below. 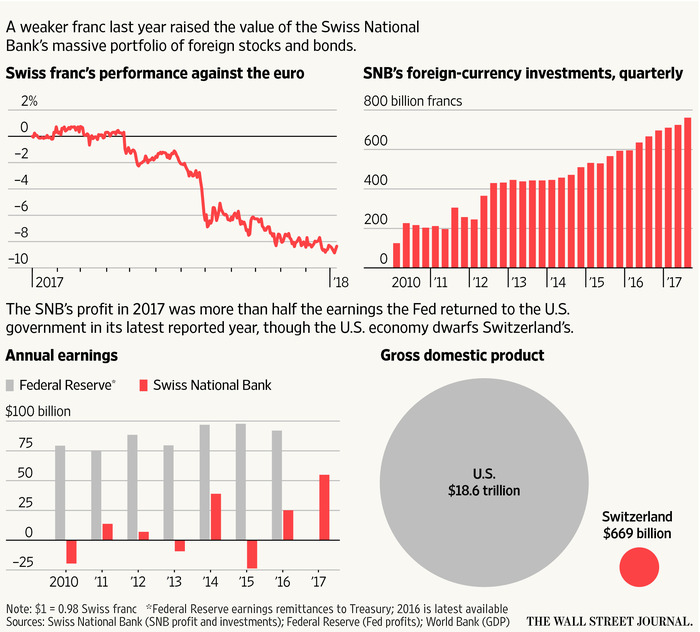 When it was created in 1913, the Federal Reserve was supposed to stabilize the US dollar. That was its stated purpose. The reality has proven to be quite different. The gap between rich and poor keeps widening. Today, more than half of US workers have less than $25,000 set aside for retirement. Thirty-six percent have savings of less than $1,000.

The Federal Reserve has almost limitless power to print paper money, extend credit and create debt, thus creating the illusion of prosperity where none exists. At one time, hard work could provide a secure future for generations. Now, a person is fortunate if hard work can help them get through the day.

Like a painting by Manet, the Federal Reserve has shifted facts to blurry shadows of light and dark without clear shapes. It’s an illusion that matters, not the facts.

Central banks have placed great emphasis on bailing out mismanaged banks before their bad management policies cause them to fail and to prop up wall-street. Waving a magic wand, central banks can make it “all better” for banks at the expense of the consumer. A fairy godmother for the rich comes in handy. The dwindling middle class is slowly sinking under the brutal economic realities of today.

ORIGINAL SOURCE: The Central Bank Effect: The Best Friend of The One Percent by Tom Lewis at The Gold Telegraph on 4/4/18