The Fed Is Faster Than the Eye; Prestidigitation as Policy Can’t Last

Our population is no longer growing. The true engine of economic health has stalled out. And to pick up the slack, to maintain the mirage, federal debt has skyrocketed to fill the void.

The chart below shows federal debt (red line) versus total full-time employees (blue line) since 1970.  Clearly, debt has surged since 2000 and particularly since 2008 versus decelerating net full time jobs growth.  The number of full time employees is economically critical as, generally speaking, only these jobs offer the means to be a home buyer or build savings and wealth in a consumer driven economy.  Part time employment generally offers only subsistence level earnings. 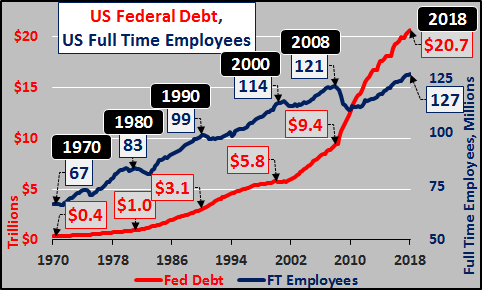 Since 1950 total annual population growth (black line in chart below) has decelerated almost 75% (from 2% to 0.6%) but more critically the annual population growth among the under 65-year-old population has essentially ceased (as the yellow line in the chart shows) and more debt has been the resounding "solution".  Massive interest rate cuts to incent debt creation have been substituted for the decelerating organic growth. 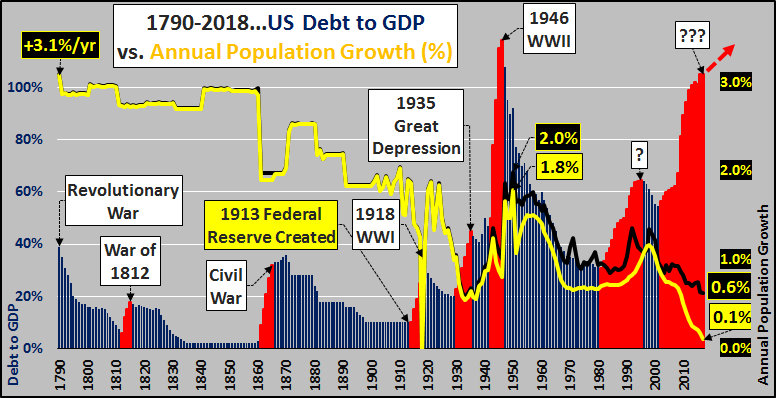 ORIGINAL SOURCE: How Did America Go Bankrupt? Slowly, At First, Then All At Once!!! by Chris Hamilton at Economica on 2/16/18