The “Gold Swap”, or How the Fed Sells Open Market Gold for Fiat IOUs

The Fed sells gold, sending the price of gold down, so a foreign government can prop up their fiat currency with the proceeds. How much real gold has been sold for IOUs? Nobody knows.

The first "gold swap" conducted between the Federal Reserve and the Bank of England: The Fed handed the BOE $200 million in bullion through the New York Fed; in exchange, the BOE gave the Fed a "gold receivables" in the same amount. This is essentially an IOU that could (in theory, at least) be cashed in for gold, but allowed the Fed to keep the gold deep in its vaults. 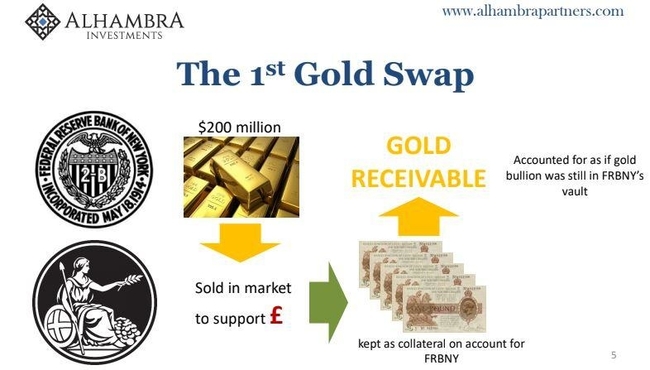 Again, in theory, one could argue that these gold receivables were, in fact, "as good as gold" because the default risk from a counter party central bank is, effectively, zero.

That’s the way this works. And of course it opens the door to all sorts of conspiracy theories. Because, obviously, people have argued, and do argue still, that if there’s more receivables than gold, then there’s no gold left. And how would anybody know the difference?

ORIGINAL SOURCE: It's Not A "Conspiracy Theory": Here's How Central Banks Actively Suppress The Price Of Gold by Tyler Durden at Zero Hedge on 3/5/18

Powell Marks the Start of a Treacherous Retreat: Good Luck Everyone.