The Ongoing Multi Year Descent of the U.S. Dollar

The folks at Elliott Wave Forecast have come up where they see that the US Dollar is at the Start of Multi-Year Downtrend. From over-indebtedness, deficits, overvaluation and a highly manipulated stock market, this not a good sign of things to come.

Since the US Dollar trades freely in the 1970s, on average it has rallied and declined in a period of 7.5 years. The chart below shows short term and long term US Dollar cycle:

From the chart above, we can see that since 1970s, the cycle in US Dollar from peak to peak (blue color) is about 15 years on average. The 15 year peak-to-peak cycle is subdivided into 2 sub-cycles: USD weakness period (peak to trough) in red color, and USD strength period (trough to the peak), in green color. Each sub-cycle lasts roughly 7.5 years on average.

If this cycle is going to repeat, then US Dollar appears to continue to get weak in red cycle (downtrend) from year 2017 to 2024 – 2025 before it starts a 7 year up cycle (green color) from year 2024 to 2031. What leads to the trend change in USD is a combination of valuation, current account dynamic, and the Central Bank Action like the chart below from Nomura shows: 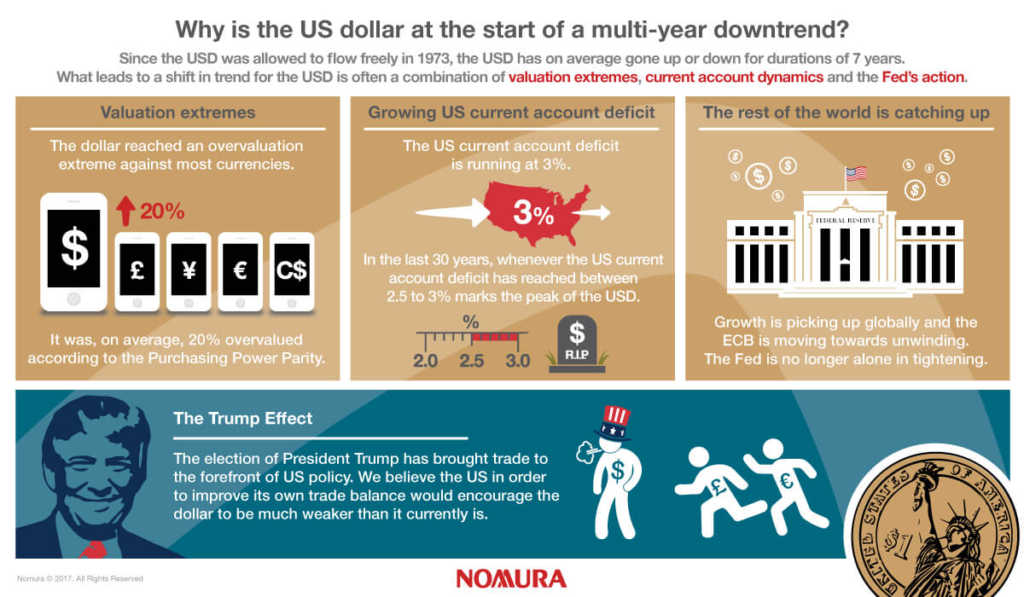 ORIGINAL SOURCE: US Dollar at the Start of Multi-Year Downtrend by EWFHendra of elliottwave-forecast.com on 3/6/18