Anyone who runs a business knows that taking a regular inventory is not optional. If you don’t, you’re susceptible to all sorts of so-called “leakage” due to theft, misappropriation, etc.

That said? The US government’s gold holdings were last audited in 1953.

As those who study the gold market now know to be an undeniable, categorical fact, the price of gold has been illegally manipulated for decades by Wall Street profiteers who appear to operate with the full agreement and protection of USG, Inc. given that the manipulators are never prosecuted and that their criminal rigging operations continue unabated to this day. 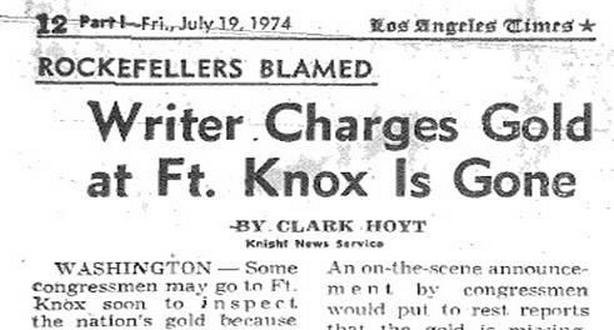 The supposed U.S. gold hoard was last audited in 1953, sixty-five years ago. The nation’s debt at that time was $266 billion, inflation adjusted. Today, it is nearly $21 trillion, or seventy-nine times greater.

In 1953, the nation owned 20,000 tonnes of gold, an amount that plunged to 8,133 tonnes by 1974 [at least according to the numbers reported by the Fed]. From 1974 until now, the hoard has supposedly remained unchanged at 8,133 tonnes, despite the fact that the country’s fiscal situation has disintegrated.

And yet, we are asked to believe that despite the fact that 11,867 tonnes of gold were sold and shipped between 1953 and 1974, generally strong economic years for the United States, not one ounce has been sold in the 44 year period from 1974 until now.