Too Bigger to Fail Again: 2008 ‘Too Big to Fail’ Banks Far Larger Now

Saying we’ve learned nothing since 2008 is far too generous. The exact same mistakes made then have been compounded and accelerated. While the current US housing price bubble hasn’t required the benefit of extra-dirty subprime fuel to fuel its inflation, systemically dangerous-due-to-their-size banks are far larger now than they were then.

The banks learned their lesson. The bigger you are, the more reckless you can be. Acquire size, at any cost. Then take enormous risks, reap the profits while times are good, then know the government will have no choice other than to make the taxpayers absorb the downside when it all unravels.

Simple and sane, if you’re a bank. Insane, and federally guaranteed to bring pain, if you’re anyone else.

America’s three largest banks, JPMorgan Chase, Bank of America, and Wells Fargo, have seen a 180 percent increase in deposits during the past decade, for a total of over 2.4 trillion. 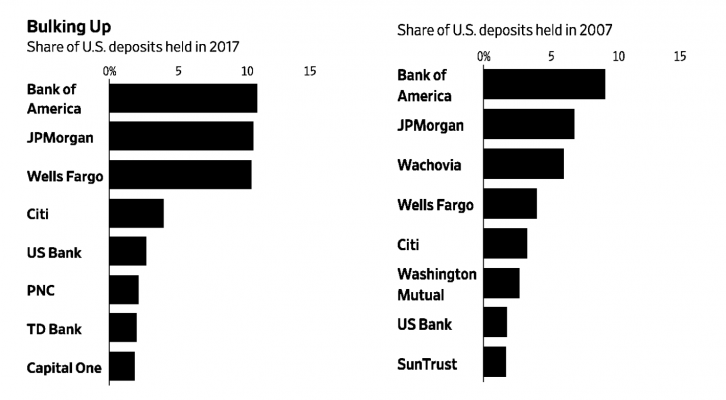 The top banks rake in the majority of consumer deposits, which gives them the money to provide cheap loans, while at the same time keeping interest rates low. Before the 1990s, regulations insured that consumer deposits were spread across thousands of different banks.

In 1994, the government allowed national banks to hold deposits coast to coast. By 1995, the three major banks were holding 5 percent of all bank deposits. That was the beginning of the mega-bloated superbanks we have today.

While smaller banks are still struggling to recover from the 2008 crisis, the Big Three are steadily gaining influence and power. All but forgotten, is the power of big banks and the damage of 2008.

Big Banks are not just a problem in the US. China’s four largest banks have tripled their assets since the 2008 crisis.

ORIGINAL SOURCE: Too Big To Fail Banks: They Continue To Get Bigger and Bigger by Alex Deluce at The Gold Telegraph on 3/29/18