One of the great myths with gold is that one ounce has always bought the equivalent of a man’s suit.

While there have certainly been times where this is true, it hasn’t always been the case. That’s because sometimes the gold price is low relative to what a suit costs, and other times the price is much higher than what an average suit costs.

And we’re about to head into a period where, as Mike Maloney says in Reason #3 he buys precious metals, gold will soon buy a whole lot more:

When the next set of crises strike, investors will flood into the gold and silver market, just like they have during many monetary resets throughout history. This surge in demand will drive the price much higher, giving those who own gold a huge jump in purchasing power.

To give you an idea of gold’s investment potential, let’s look at the size of the gold market compared to the total amount of financial assets trading around the world today…

We tallied all global financial assets (excluding derivatives) and divided it by the world population, to come up with a dollar amount per person. We then took the total amount of investment gold (coins and bars, excluding paper contracts) and also divided it by the global population.

What we found is that there is roughly $40,000 of liquid financial investments available per earthling. And in stark contrast, there’s just $200 of investment grade gold per person. 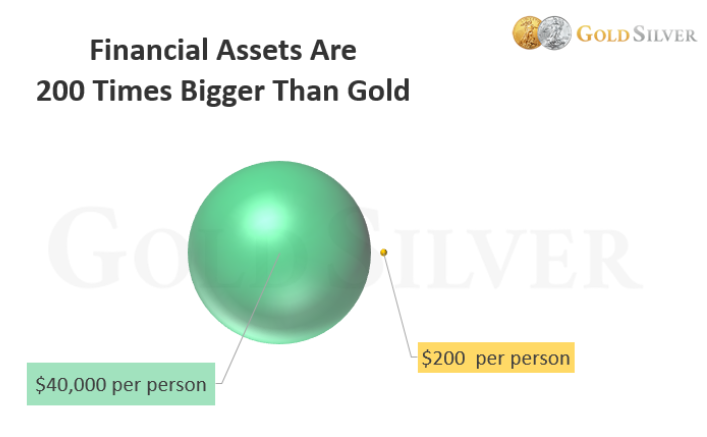 It’s obvious that the gold market is tiny compared to the total amount of financial investments currently trading around the world today.

And here’s the implication of this statistic:

We don’t know exactly how many investors will turn to gold in the upcoming crisis, but this clearly shows the potential is enormous.

So much potential, in fact, that gold won’t just maintain its purchasing power, but will push your standard of living higher.

It will be one of those periods in history where we’ll be able to buy a whole lot more than just one man’s suit with an ounce of gold.

Gold and silver will be safe haven investments in the upcoming monetary reset, but based on their potential, also return a potential windfall.

Watch all of Mike’s Top Ten Reasons he buys gold and silver.

Throwing Money at the IRS Won’t Fix Its Problems

Big Tech Stocks Plunge with Spooky Parallels to Dotcom Bust: -25% to -66% from Highs...

American Energy Bills Are Set To Soar This Winter

California Gasoline Is More Than Double the Price in Texas, What Do You Pay?