Talking a big game about your future optimism is easy. But the most serious decision anyone makes over the course of their lifetime is whether or not to bring a new life into the world as they understand it and believe it will become.

When over 80% of Americans have seen their net worth decrease over the past 10+ years, is it any wonder that birth rates have declined and continue to decline? And given the current state of the union, does anyone think this trend is anywhere near reversing?

Population growth is the most basic underlying driver of the economy. If birth rates are cratering and the only other driver of population growth, immigration, is choked off at every turn, exactly where is organic domestic demand supposed to come from? 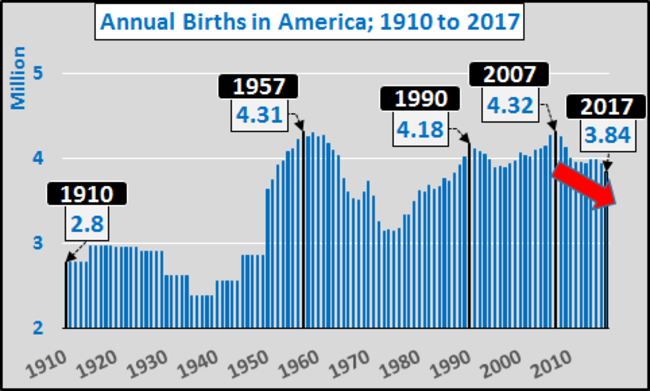 The ultimate indicator of personal economic confidence is the determination to have children. The chart below shows annual US births from 1910 through 2017 and it is estimated there were 3.84 million births in 2017, nearly a hundred thousand fewer than in 2016.

The chart below details the growth in household net worth by income levels from '07 through '16. Those that have significant assets have been further enriched...those without have been punished (and as the saying goes, "the beatings will continue until morale improves"). 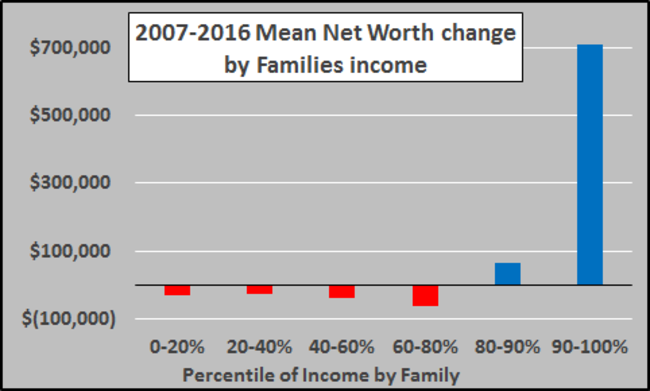 The continuation of the present policies will only further grossly enrich a shrinking minority while continue to penalize those of childbearing age (among others). This will only further push the birth rate into negative territory (well below replacement level).

The Fed's inequitable cure is essentially saving the elderly patient at the expense of the present and future of the patients’ offspring. The merit of an economic system which results in the childbearing populace unable and/or unwilling to perpetuate the species is sorely in need of reconsideration and reconstruction.

ORIGINAL SOURCE: Ultimate Indicator Suggests US Never Recovered From the Great Financial Crisis by Chris Hamilton at Economica on 3/19/18