When, Not If: The Clock Is Ticking on the Federal Debt Bubble

Leave it to the committed anti-debt pragmatists at Mises Institute to sum up the stark reality of economic growth fueled by a Fed furnace that burns printing-press dollars.

There is no means of avoiding the final collapse of a boom brought about by credit expansion. The alternative is only whether the crisis should come sooner as the result of a voluntary abandonment of further credit expansion, or later as a final and total catastrophe of the currency system involved.

Worldwide reliance upon debt has seen a sharp uptick over the past 16 years, with world powers seeing credit issuance to non-banks continue to rise even as its at least 250% of GDP for the US, China, and the Euro area. Japan checks in from the nosebleed seats at nearly 375%: 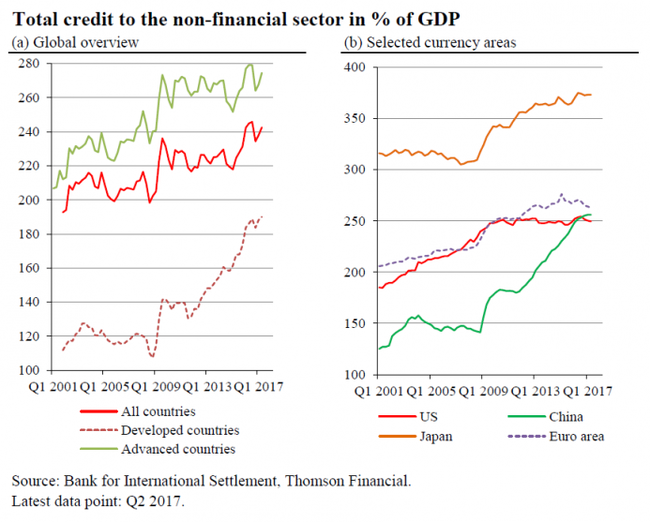 As ever, it’s the timing of the collapse that is the great ‘x’ factor, the giant variable. Given that governments are supremely incentivized to keep the plates spinning, thereby putting off the inevitable hangover of such a massive fiduciary stimulus spree, when the crash does come it is likely to be massive in scale and breathtaking in the speed with which it unfolds.

It is impossible to predict when business will deteriorate with a fair degree of precision. There is no formula according to which the timing of the boom turning into bust could be calculated. In view of political attempts to keep the boom going, however, the probability of a continuation of the inflationary boom seems to be higher than the probability of an immediate deflationary bust – as central banks appear to be determined to “fight” any new crisis with even lower interest rates and even more money printing, through which currencies will be debased.

Fed Will Likely Stress Commitment to Low Rates amid Pandemic

Bubble Talk: Is the Good All Priced In?
More News