Two charts of the Nasdaq 100, almost 20 years apart, appear to be the same unless you look closely. The first is right now: 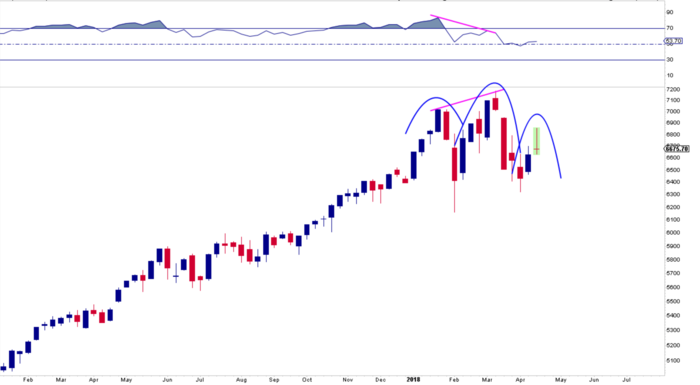 The second? What appears to be the continuation of the chart above. But it’s the Nasdaq 100 as it collapsed in 2000: 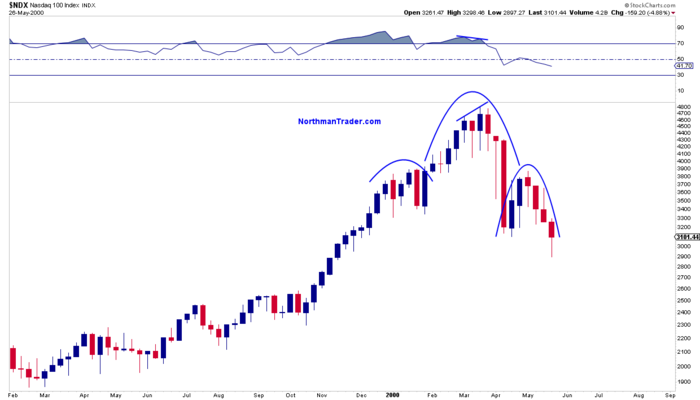 In early March I mused about a market paradox, one where tech would make new highs on a negative divergence while the $DJIA would not make a new high. This event did indeed transpire and it still may have significant implications as it is so very reminiscent of the action we saw in the year 2000.

We haven’t even tagged the quarterly 5 EMA on $NDX and it’s up 6 quarters in a row. All we’ve had is another higher low and an intra-quarter dip. That suggests a pullback in context of an overbought spike, but no correction.

A correction should leave some evidence that there actually has been one. No, from my perch this means that tech has yet to properly correct.

Given the high on a negative divergence and $DJIA failing to make a new high can we draw any conclusions yet as to the next larger move?

Frankly, not quite yet, but charts are suggesting that next week may be very pivotal for tech in particular. A do or die moment.

ORIGINAL SOURCE: Do or Die for Tech at Northman Trader on 4/20/18