3 Trends That Could Push Gold Higher in Years to Come

For several years, gold investors have remained patient while continuing to build or hold onto their stash. But for those waiting on an upswing in gold prices, the signs of one are beginning to present themselves.

There have been some curious developments in the gold sector in recent years, most of which have flown under the radar of mainstream press reports. And the more they ignore what’s happening in gold trends, the greater the surprise to the upside will be.

It could indeed be very exciting for those of us that are overweight in precious metals and have stayed the course.

While stocks and cryptos dominated last year’s headlines, check out these developments in the lonely gold industry (these are in addition to the other developments we reported).

Unbeknownst to most investors, gold trading volumes on the COMEX hit a record high in 2017. 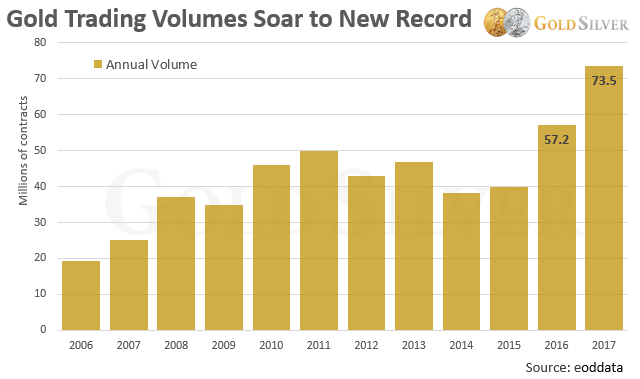 With no fanfare, the number of gold contracts traded on the COMEX soared to a new record. Higher than 2011 when the gold price was on fire, and higher than when traders dumped their holdings in 2013. Not only that, but trades were more than triple the levels of 2006, which came in the middle of the biggest 21st-century gold bull market. In other words, the interest in gold trading has never been higher. And trades are expected to high another record high in 2018.

To be clear, this data measures “trading” activity, so it includes both buys and sells. But the jump in volume over the years 2016 and 2017 is bullish because prices were rising (it would be bearish if prices were falling). Gold was up 8.1 percent in 2016 and 12.1 percent in 2017.

Despite the drop in bullion sales, traders at the world’s biggest futures market are buying more gold contracts than they’re selling, a staunch base-building indicator.

The World Gold Council is not a U.S.-centric agency, and those of us that live and work in North America may not be aware of exactly what’s happening elsewhere around the globe. Their recent report on global gold ETFs was very interesting.

This table shows the activity of the top 10 gold-backed ETFs in 2017. You and I don’t buy paper gold products, but the activity here can measure interest. Check out that last column, which shows the percentage increase in holdings — the ones I highlighted in green saw holdings rise more than the price of gold.

You can see that holdings in eight separate funds jumped anywhere from two to over five times more than the gold price!

While not all countries saw this level of growth, it’s clear that many investors see a pressing need to add more gold to their portfolios. This once again shows that when fear is high, investors seek the safe haven of gold.

What is it they see coming? There are lots of potential events that would send the gold price sharply higher, including a stock market crash or the fallout from soaring debt levels, but the point is they are buying because they see something coming that gold can insure them against.

The World Gold Council also recently released an in-depth report titled “Gold 2048”. This analysis of the gold market over the next 30 years, which can be downloaded here, points to coming structural changes in global economics, politics and social climate as potential driving factors that will influence gold.

Among other things, working-age populations in developed countries are declining, other workers are getting replaced by automation, and shifting demographics may lead to a shift in economic power and rising geopolitical uncertainty. In other words, the coming three decades are anticipated to be unstable times — and gold has nearly always performed best in times of instability and uncertainty.

Our friend Nick Laird at Goldchartsrus tracks gold demand from the “Silk Road” countries — China, Russia, India and Turkey. You can see from his November 2017 chart that demand from these four nations has exploded over the past 10 years.

Check out the bottom part of the chart, though — except for three months in 2017, demand was greater than total global production.

This trend obviously can’t last. It explains why we continually see exports from developed world countries to these nations, especially China. At some point, the demand for physical metal will exceed what is readily available in investment form and will push prices higher on its own.

But it’s the message behind these elevated buying levels that is most important. Just like ETF buyers, regardless of the reasons, these four emerging countries see the need to continue to accumulate huge amounts of bullion.

And this level of buying isn’t about to let up. You’ve probably heard about the “One Belt, One Road” project, which will link China, Central Asia and Europe. It is probably the biggest infrastructure project ever attempted by mankind. And the World Gold Council says this will have significant implications for the gold industry; demand will jump due to improvements in efficiency and access.

Not only this, but according to the WGC Gold 2048 report, India’s middle class could increase 4-fold as a percentage of its population should their political and social reforms come to fruition. This increased purchasing power would make the world’s largest gold market even larger, pushing gold demand and thus gold prices even higher.

Again, there are multiple potential reasons for this level of buying. Mike has warned about many of them before. But if these countries see the need to keep buying gold, well, maybe we should, too.

These three gold trends are staunchly bullish indicators. They clearly signal that many investors around the world see a pressing need to hold gold. I encourage you to stay the course and make sure you own enough physical metal to withstand the type of events and crises that, like us, these investors see coming.