With deflation engulfing the world right now, is there really any reason to worry about inflation?

Yes. As I’ll show below, not only has inflation started abruptly many times throughout history, the current actions of the Fed and other central bankers are the very actions that have caused high inflation in the past.

We have some research on inflation that we haven’t seen elsewhere, research that can potentially be very useful to all of us in preparing for what is likely ahead.

You’ve undoubtedly heard about the unprecedented level of fiscal and monetary stimulus governments and central bankers have undertaken. The response to the virus has been unprecedented in all of history.

Perhaps the more appropriate question is, how does all of this not lead to inflation?

Deflationists will point to Japan, which not only has history’s highest debt-to-GDP ratio, but also the most radical monetary policy—and yet has low to no inflation. Demographics are the likely explanation, as Japan’s aging population has put downward pressure on prices for years despite all the printing.

But Japan is the exception, not the rule. And don’t forget that governments and central bankers prefer inflation over deflation. In deflation, prices fall, which can lead to lower profits for businesses… higher unemployment… lower wages… and lower consumer spending. And of course inflation reduces the real burden of the government’s debt. Governments want inflation.

At a minimum, it seems we should prepare for some level of inflation, perhaps as bad as Mike Maloney outlined in episode 7 of Hidden Secrets of Money.

Most mainstream investors don’t realize that history shows inflation can quickly get out of control, and not just in some mismanaged third-world country. Inflationary shocks have occurred right here in the US. Multiple times.

Most historical studies on inflation only go back to the 1970s. But as Mike has always taught, the further back you go in history, the more you can learn about the future.

Amity Shlaes, an author with an impressive bio, identified several examples from the past 100 years when US inflation started mildly but then soared to alarming levels. Even more startling is that those inflationary spikes occurred within just two short years. 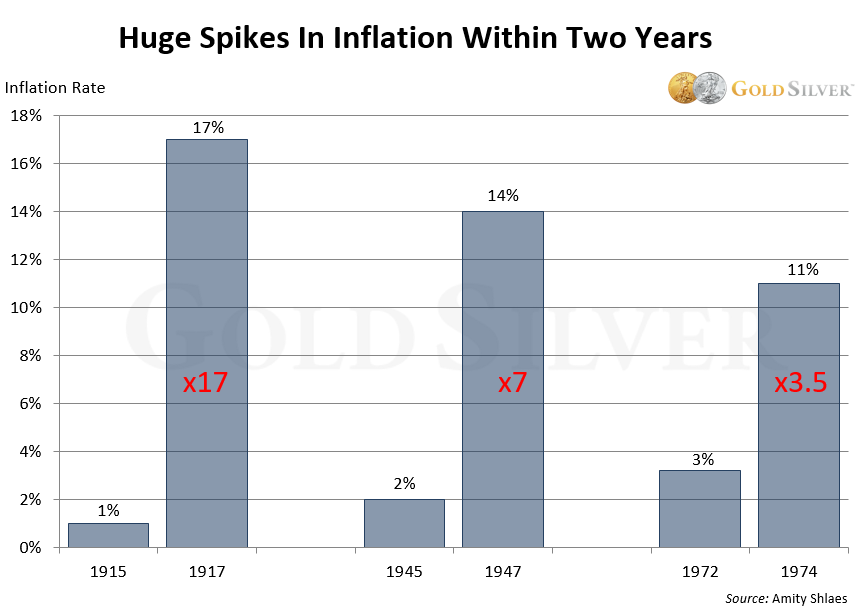 In fact, you’ll notice these inflationary spikes occurred roughly 30 years apart. And it’s been over 40 years now since the last one…

What happens to inflation rates if the runaway levels of stimulus begin to spread through the economy?

If we matched any of those prior rates, here’s what inflation could look like by the year 2022, based on March’s CPI reading of 1.54%. 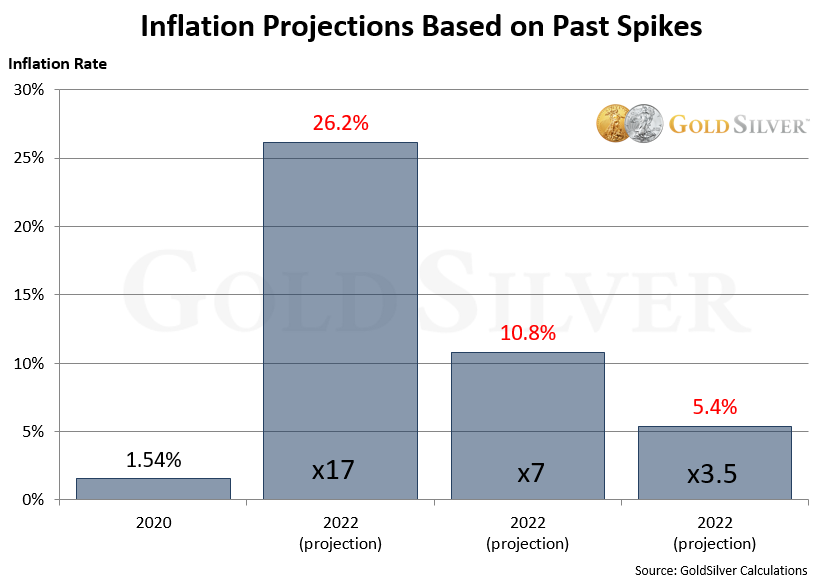 Even the least of these increases would catch most people off guard; when’s the last time North Americans lived through a soaring inflationary environment?

The reality is that most people won’t be prepared for it financially or emotionally. This alone could lead to panic-buying of gold and silver. And since you and I bought our fire insurance before the fire started we’ll profit mightily when that rush kicks in.

Any of these scenarios would be good for gold and silver prices, of course. That would remain true even if we tip into hyperinflation.

In fact, based on history, one of the surest predictors of when gold and silver prices will rise is when inflation sets in. Even just the expectation of inflation, before it actually rises, would push investors into our favorite investments.

Given the extreme degree of currency abuse that’s occurring around the world, sudden and soaring inflation is not some farfetched theory. Sooner or later we could easily become victim to a rapid and scary decline in purchasing power.

History has a clear warning for us:

I encourage you to do what Mike and I and everyone else at GoldSilver are doing and protect your purchasing power.

Longtime Gold Market Crook Deutsche Bank Wants Back in the LBMA: Ronan Manly
More Lies in the CPI
After the Boom Must Come the Bust
Price Inflation Slows, But the Economy Keeps Getting Worse
What Do Initial and Continued Claims Suggest About Timing of a Recession?
Kansas City Fed Services Survey Tanks To -11 In January As Fed Withdraws Monetary Pu...
China and the US at Sovereign Debt War
World War III: Has It Begun?: Rickards
"The Bot Is Out There. It Doesn’t Feel Pity, Or Remorse, Or Fear, And It Absolutely...
Labor Shortage Talk Turns to Job Cuts
IRS Alerts Taxpayers They Must Answer a New Question On Tax Forms Or Face Consequenc...
Americans Fall Behind on Car Payments at Higher Rate Than in 2009: Bloomberg
Pending Home Sales Suffered Worst Annual Decline Ever In 2022, Despite December Surg...
UMich Inflation Expectations Plunge, Democrat Sentiment Sinks
The Core! Core PCE Deflator Declines To 4.4% YoY As M2 Money Stops Spinning At -1.3%...
More News