The Rich Get Richer: Fed Policies = Wealth Augmentation, Not Creation

It's not rocket science. Heck, it's not science at all.

Printed money loaned out to big banks and corporations is welfare for the rich. The ridiculous hope that giving money to the extremely wealthy and imagining it will somehow end up in the pockets of someone other than the already-extremely-wealthy is what passes for Fed policy these days.

But hey, look at those gaudy economic numbers (that reflect raised averages hyper-skewed by the outsize gains of the already wealthy)! Look at that historically low unemployment rate (that would triple or quadruple if you included those so disillusioned they have given up even looking for work)!

The Federal Reserve has been determined to create “Wealth Effects” throughout the economy since 2008, which has left the majority of Main Street on the sidelines.

The Fed’s objective was to make American households feel wealthier by pushing up the valuations of stocks and bonds. However, this paper wealth mentality has worked beautifully for Wall Street and the 1% but has destroyed much of the middle class as wealth inequality continues to skyrocket.

In fact, former Federal Reserve Chairman Alan Greenspan has gone on record to warn of a massive bond and stock bubble thanks to historic low-interest rates. I guess, the idea of rising paper wealth to drive a wave of renewed borrowing and spending hasn’t quite worked out as planned. 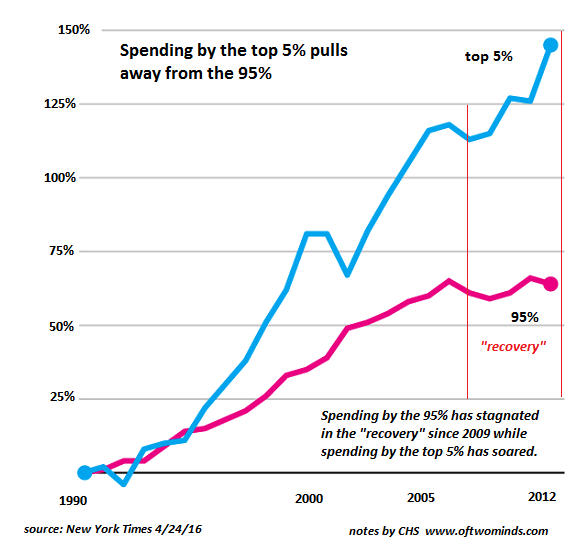 Sadly, most households have been squeezed as the majority of the wealth created has only gone to the top 5% of households earning in excess of $200,00 annually, meanwhile the bottom 95% have suffered.

It is evident that these “Wealth Effects” that the central bankers have been chasing does not drive inflation-adjusted wages of the bottom 95% which has stagnated for decades. It merely accelerates purchasing power decay where the 1% get the wealth first, and it then trickles down to the rest of the economy. The experiment of prolonged zero interest rates has destroyed savers and rewarded reckless spenders who have helped push household debt to unprecedented levels.

ORIGINAL SOURCE: The Federal Reserve Has Done a Great Job at Destroying The Middle Class by Tom Lewis at The Gold Telegraph on 4/18/18