It was a rout! Other than oil and some commodities, virtually all asset classes took it on the chin in the second quarter of this volatile year.

Our quarterly report looks at the performance of gold and silver vs. other major asset classes in Q2, along with YTD performance. We also examine the conditions that could impact precious metals in the second half of the year.

In what amounted to a crash in most investment assets, only the US dollar and oil (along with some commodities) rose last quarter. 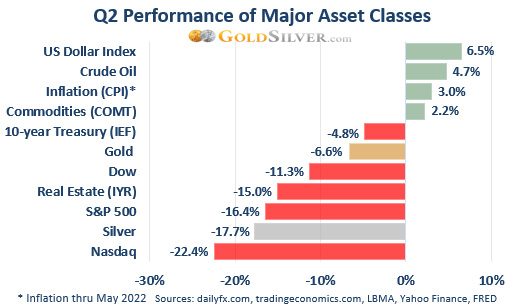 The broad stock market took it on the chin. Uncertainty in global markets pushed the US dollar higher. The 10-year Treasury lost 4.8%, and Bitcoin (not shown) crashed a whopping 56.6%.

Oil rose, along with a small gain in commodities. However, I’ll point out that as a group, metals ended the quarter down significantly from their earlier highs—copper, for example, logged its worst quarterly performance in more than a decade.

Margin calls and a desire to move to cash meant the adage “there’s no place to hide” was largely true last quarter. This temporary reaction obviously affected gold and silver.

The first half of 2022 was harsh to most investors. Very few assets logged a gain. 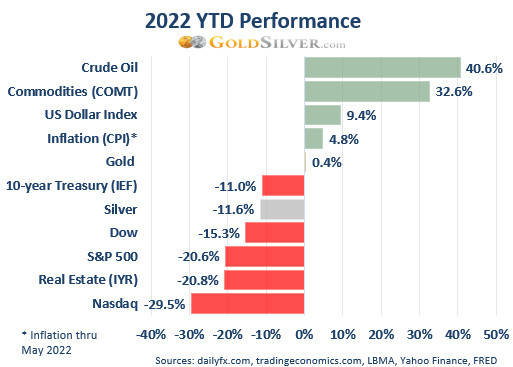 Gold is flat on the year, one of few assets that’s survived. It ended the quarter at its one-year average.

Inflation and the US dollar moved stubbornly higher.

A number of hot issues are likely to impact gold and silver in the second half of the year.

Recession Watch: GDPNow for Q2 is predicted at -1.0%, while the Atlanta Fed projects US GDP at -2.1%. The definition of a recession is when gross domestic product contracts for two consecutive quarters, and it’s getting easier to see that happening. “Real” GDP fell at an annual rate of 1.6% in Q1.

Numerous economists have publicly stated they expect the US to enter a recession. “More likely than not” said Andrew Balls of PIMCO. “Uncomfortably possible,” well-known economist Mohamed El-Erian said. As a group, economists give a 50% chance of a recession within the next 12 months. Historically, gold has usually risen during recessions.

With the slowdown would come higher unemployment. Facebook warned employees to “brace for layoffs.”

This naturally raises a question. How long can the Fed continue to raise rates?

Powell admitted that elevated rates could lead to a recession. We’ll note that only 3 of the last 20 rate hikes did not end in recession. And though rates are rising, the “real” rate (10-year Treasury minus inflation) remains deeply negative.

Stock Market Vulnerability: Goldman Sachs Group warned that the risk of a renewed selloff in equity markets is still high, as they believe investors are pricing in only a mild recession. One also has to wonder what earnings will look like in Q2.

Either way, would the Fed consider the impact of higher rates on share prices? One reason stocks have fallen is almost certainly due to investor fret over their determination to tame inflation.

President Biden unfortunately didn’t help matters… when asked how long Americans should expect to pay high gasoline prices he replied, “for as long as it takes.”

Real Estate Rollover: Higher mortgage rates are leading to a cooling in the red-hot housing market. U.S. existing home sales sunk to a two-year low in May, though the median house price still rose 14.8% from a year earlier.

The jump in mortgage rates indeed appears to be cooling the market. The National Association of Home Builders said that not only has the cost of building a home risen, but predicted that mortgage lenders, refinancing companies and real-estate brokers will lay off thousands of employees in the coming months.

Debt and Deficit Spending: As the Wall Street Journal points out, higher interest rates and quantitative tightening “will increase the volume and cost of federal gov borrowing, slamming the federal budget and exposing the consequences of decades of deficit spending.” And if the economy does contract, the Fed will have limited capacity to spur a recovery with fiscal stimulus.

Meanwhile, the Fed’s reduction in its asset portfolio is going slower than it projected. June saw a $1.5 billion reduction, far short of the $67 billion per month they need to reach their stated goal.

US Elections: It’s a midterm election year, with the country as divided as ever. For what it’s worth, the Stock Trader’s Almanac reported that since 1946, the second year of a new Democratic president has ended with the S&P 500 losing an average of 2.3%.

Crypto Weakness: The Bank of America reported that customers transacting in crypto has shrunk by 50%. Bloomberg noted $4 billion has been loaned to crypto miners, secured against the mining rigs as collateral. Securitize Capital said this could lead to a shakeout, as leveraged players need Bitcoin prices greater than $20,000 to cover infrastructure and interest rates.