The ways 2018 resembles pre-crash 2008 are more numerous than the ways in which they differ, at this point. It will be fascinating to see just what exotica the Fed resorts to in efforts to prop up and stimulate a market that has become so bloated and excess-ridden primarily due to the inexplicably interminable decade of stimulus conditions it is already operating under.

In the mid-2000s, the U.S. economy seemed to be riding high, but two key problems lurked below the surface: excessive household debt and a housing bubble.

Part of the first problem was that real, inflation-adjusted household incomes were actually lower than they had been in the late 1990s. To maintain living standards, Americans took on more debt thanks to relatively low borrowing costs and weak underwriting standards among lenders. Total household debt soared more than 50 percent, from a little over US$8 trillion in 2004 to $12.69 trillion by 2008. 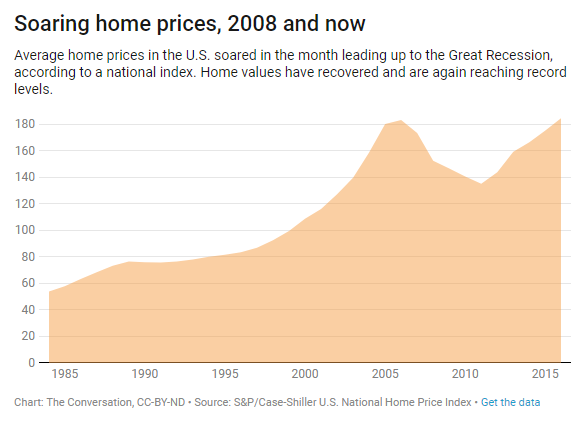 That brings us to the second problem. Most of that was mortgage debt. The housing bubble pushed it to the point that it was unsustainable as housing prices outstripped incomes, leading banks to come up with ever creative ways to lend people money they ultimately couldn’t pay back.

Our new research shows that these rosy-looking stats conceal the same two related problems as 10 years ago: excessive consumer debt (relative to income) and unaffordable housing.