Breaking Bad: The Decline of Our World Financial and Economic Systems

As you might have already guessed from that very specific number, that is exactly what has already happened. 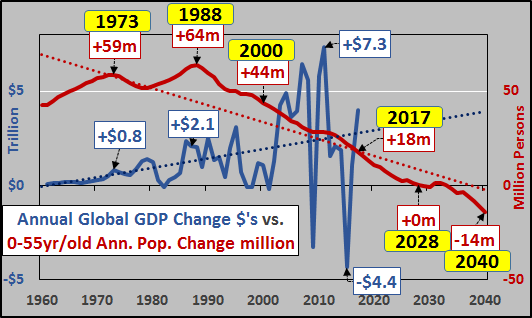 Annual population growth has decelerated by 77% or we are adding 49 million fewer 0 to 55yr/olds annually than we did during peak growth in 1988. Within a decade, the world under 55yr/old population (excluding Africa) will cease growing and begin an unknown period of depopulation. In fact, the forward estimates are based on the UN's more "optimistic" medium variant...the reality will almost certainly be lower.

The fundamental driver of growth is vanishing. So, in its stead, world governments have turned to financial trickery, to interest rate cuts and debt, debt, and more debt, to spur synthetic growth. Global debt levels vs. world GDP, against a backdrop of drastically declining developed-world population growth, are soaring:

The further the central banks intervene to force populations whose growth is decelerating (and resultant potential economic growth) to overshoot, the longer the duration and severity of the resultant ultimate rebalancing.