As many of you know, we pride ourselves on the education we provide, everything from Mike Maloney’s Hidden Secrets of Money series and regular video updates to our numerous articles and Insider’s program. When you buy from GoldSilver you help fund the costs for this education, which we think stands head and shoulders above what is available elsewhere in the industry. And the following is another example of the kind of in-depth research your efforts help fund… Jeff’s report on the state of the Chinese gold market below is something you probably won’t find in mainstream reporting. And the message is not only insightful but encouraging. Enjoy, and thank you again for buying from GoldSilver to support our ongoing educational efforts.

I read a mainstream report about a decline in gold imports into Hong Kong, with the journalist concluding that gold demand in China is therefore down.

The interesting thing about the article is that the figures stated were accurate; Hong Kong imports into China are down. But here’s the thing: the message is wrong. It’s incomplete, misleading, and as I show below, misses the forest for the trees on what’s really happening with gold inside China. If an investor makes a decision because of that article, they may not be basing it on false raw information, but on an entirely faulty conclusion.

The fact is, overall gold demand in China is rising. More importantly, there are fundamental developments underway in the country that will almost certainly have far-reaching effects on the gold market. And many of these developments – if not all – will serve as major catalysts for the gold price. And since they’re rarely reported by the mainstream the investment community at large will be caught off guard when they transpire.

I’ve met Chinese dignitaries and government officials in China. I’ve spent time with some Chinese miners, from executives to pick-ax explorers. I’ve talked to everyday investors. I’ve done research into this market for years. What follows is a much broader, deeper and accurate portrayal of China’s gold market than what is usually seen in the media. At the least, a very different message emerges once you see it all tallied in one place.

As you read, consider the big picture message of everything taking place, and see if you agree that China’s activity in the gold market will support – and likely catapult – the price much higher…

We first have to start with how both the Chinese government and its citizens think about gold. They see it very differently than Westerners (US, Canada, Western Europe):

The Chinese view gold in the context of its role throughout history. Not as a vehicle for trading in and out of or even as an investment, but as the most secure asset they can hold to safeguard their country’s future monetary and financial standing.

Those government and mining officials I mentioned were part of a mining tour several years ago, and I can tell you they dismiss (and even laugh at) the Western economist who arrogantly calls gold an outdated relic. They’re buying gold not just as a portfolio diversifier but in preparation for a new monetary order, the star of which will be a diluted and dying US dollar, as Mike has succinctly pointed out.

As a result, they’re not looking at where gold will be in the next three months; they’re accumulating and holding for what could play out over the next several years and decades. It is this overarching long-term view that guides their decisions.

With this big picture view, check out China’s activity in the gold market this year…

What the Western journalist forgot to mention in their report is that China has allowed direct imports into the country – other than through Hong Kong – for a number of years now. So what used to be the proxy to measure Chinese demand is no longer accurate, and in fact can be very misleading.

China rarely releases trade data on gold, so none of this data gets reported publicly and remains unknown. Why don’t they release the data? It seems clear that leaders don’t want import figures tracked so the rest of us don’t know how much they have. This move doesn't imply demand is falling – just the opposite. And given the level of demand in the country, we know these amounts are not insignificant.

For starters, the central bank added to its official gold reserves in the second quarter (from 1,839 tonnes to 1,843 tonnes), and consumer demand rose 5%. But this is still just looking at one part of the elephant…

The Shanghai Gold Exchange trades primarily in physical metal (the Comex, in contrast, trades mainly in gold derivatives). We can’t be certain, but “withdrawals” from the SGE can serve as a fair proxy for demand in the country. You can see in the chart below that it’s lower than the 2015 peak, yet look how much worldwide mine production it still eats up. 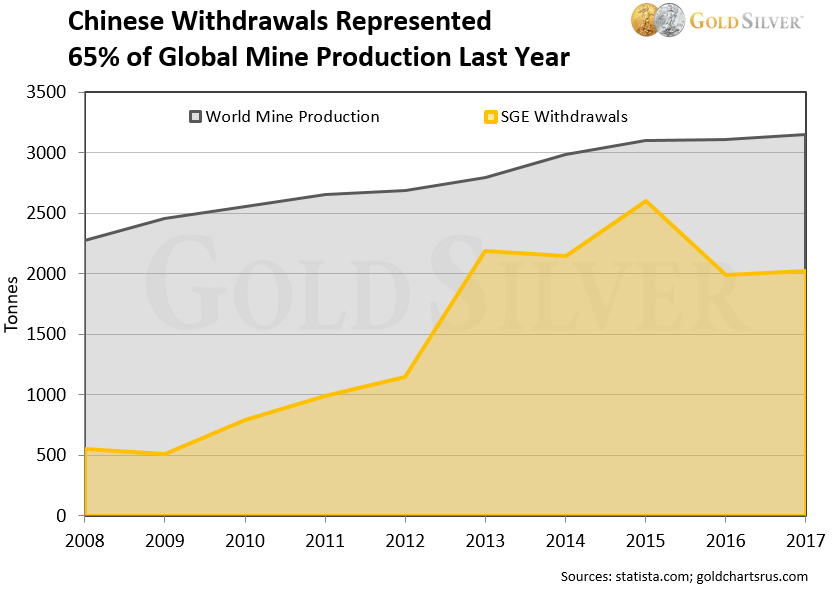 And by the way, these withdrawals reduce trading volume in North America. Why? Because the Chinese don't sell. So that metal won't come back onto the market anytime soon, if ever. I saw one “Wall Streeter” express this very concern, which tells you how real this trend is.

Further, China’s activity in the gold market goes beyond what they’re currently buying. Check out the moves the Red Giant has made just this year that show how serious it is about gold:

Does this all sound like weak gold demand? Do you get the impression that China’s interest in gold has subsided? Hardly.

These developments show how China has supported the current gold market up to now. What’s next demonstrates the potential major impacts yet to come…

China and Gold, the Future: A Lit Fuse

There are numerous developments underway inside China that most mainstream investors are either unaware of or haven’t paid attention to. Each of these are potential catalysts on their own – together they could send the gold price through the roof…

There’s one last potential catalyst, which could surprise the global markets and on its own light an instant fire under the gold price…

Many countries store gold as part of their official monetary reserves. It’s a backstop, an insurance policy against a collapse in the value of their currency or other economic calamities.

Almost every report you'll see about gold reserves measures them in relation to that country’s total reserves. The US, for example, has 73% of its total Reserves in gold, while China officially has just 1.4% of its Reserves in gold.

But this calculation is misleading. The US has minimal foreign currency reserves, while China has $3.05 trillion. The denominators are vastly different.

A more practical measure would be to compare a country’s gold reserves to its annual GDP. This would tell us how much gold would be available to support the economy in the event of a global currency crisis, something Chinese leaders appear to be preparing for.

The following table shows the six largest holders of gold in terms of GDP (Eurozone countries are combined into one and include the ECB). Notice how much gold China would have to purchase to increase their gold-to-GDP ratio to just 2%.

You can see that the Chinese government would have to buy 3,940 tonnes of gold –139 million ounces – to reach a 2% gold-to-GDP ratio. This would then put them on par with the top gold holders around the world. Though keep in mind their GDP is growing much faster than all those other countries including the US. Either way, this is probably a more realistic gauge of how they determine if they're closing in on their reserve goals.

It seems clear that with China’s longstanding interest in gold, their economic growth, and their ongoing attempts to remove themselves from the US dollar system, that they will want more gold – probably a lot more gold – in their Reserves. Even mainstream economists have publicly stated that China’s current level of gold holdings is too low, given the size of its economy and the growing significance of its currency.

So, is China stockpiling that gold now? Is that where some of the untracked bullion is going?

The answer to those questions is probably yes. I say that because that’s exactly what they did before; China announced a 75.6% increase in their gold Reserves out of the blue in 2009 – did they suddenly just buy all that, or is it more likely they had been accumulating it and decided then they wanted to make the announcement? Given the level of secrecy in many areas of their society, the latter is almost certainly the case. And that means this:

When might this happen? That’s total conjecture, but consider this: it’s possible they don’t make an announcement of this nature until they have all they want if we’re in or near a crisis. Which means the number would have to be big.

This really could be a fireworks-type event for the gold industry.

China is only one catalyst for the gold price. When you combine the numerous other forces that could ignite the gold market, I just don’t see how we don’t get a mid- to high-four-figure price at some point.

Keep in mind, though, that gold is not just about the price. It's about the role it will serve in your finances, investments, and everyday way of life during a major currency upheaval. And yes, further down the road, it’s also about how gold will become dramatically overvalued compared to other investment classes.

If you see the future as China sees it, you need to have a meaningful exposure to physical gold. Anything that represents a small portion of your net worth will not provide the kind of asset and lifestyle protection you'll need.

I don’t know about you, but I continue to buy gold. And I’m not worried about the price, because China's got my back.